All Roads Lead to Home

QMJHL Playoffs Mooseheads
by
Will MacLaren 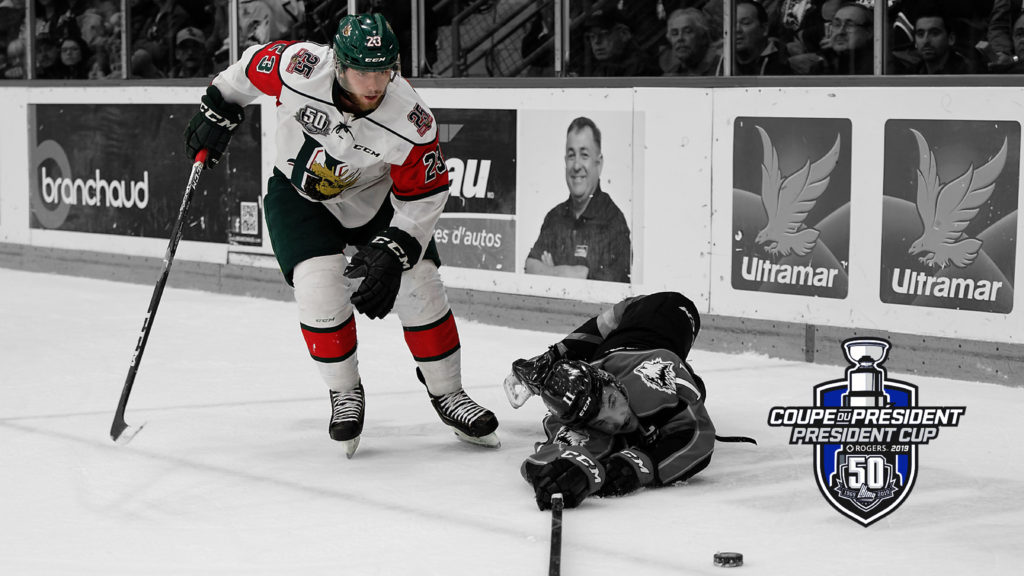 On December 22nd, Keith Getson was enjoying the holiday break, his fifth such respite as a member of the Charlottetown Islanders. While Christmas shopping in Halifax, his phone rang. It was Islanders’ Head Coach and GM Jim Houlton, fresh off a shopping trip of his own.

Hulton’s message was one that, though it may not have completely surprised his long-time charge, was no less emotional.

Getson was traded. To the Halifax Mooseheads.

Picture this; you’re a 19-year-old QMJHL hockey player who, after two extended playoff runs that saw you fall just short of a berth in the league’s championship final, has just been informed that you’ve been dealt to what more or less equates to your hometown team. And by the way, that team is already guaranteed a berth in the Memorial Cup. What would you do?

To Keith Getson, it was a no-brainer.

Home. A place where he would be staying a little bit closer to over the next few months. Where he’d be competing in the President Cup Final, en route to chasing junior hockey’s highest honor.

The shopping could wait. After all, there are some things money can’t buy.

A Fan in the Stands

Bridgewater, Nova Scotia may not be Halifax, but being an hour down the road, its people share many similarities with those in “the city”. This includes a shared interest in mainland Nova Scotia’s lone QMJHL squad.

Keith Getson grew up in Bridgewater. He also grew up a Mooseheads fan. His entire family were fans. He went to the games. He collected the memorabilia. He also collected some of his most endearing hockey memories from the stands at Scotiabank Center.

He now relishes the opportunity to create more of these memories while taking to the ice.

“What really sticks out for me (as a fan) was watching (Nathan) MacKinnon and (Jonathan) Drouin the year they won it all (in 2013),” Getson, who was playing Bantam hockey that year, recalls. “It’s surreal to know that we’re going to have a chance to do the same thing they did right here (in Halifax).”

It’s pretty cut and dried if you live on PEI. If you’re from there, you’re an Islander. Not from the Island? You’re from “away”. It’s as black and white as the mud is red on the shores of the nation’s smallest province.

When Keith Getson arrived in Charlottetown, he was yet another guy from “away”. When he left, four and half years and 339 regular season and playoff games later, he wasn’t just an Islander. He was THE Islander.

Getson’s arrival in Charlottetown coincided with an organizational renaissance. During his tenure with the club, the team reached the second round of the postseason on two occasions, only to follow that up with back-to-back Semi-Final berths.

It’s what he accomplished over those four and a half seasons – and, in a way, what he didn’t – that shaped the player that is currently on a collision course with junior hockey’s brightest spotlight.

“Even when I was 16 and we beat Sherbrooke in round one, it was like winning the league for us,” Getson fondly remembers. “The franchise hadn’t won a playoff series in 11 years and that kind of hung over the team. When (former Islander Spencer) Cobbald scored in overtime, it was an amazing moment. We had a couple of great runs my last two years there but losing to Blainville in Game 7 (of the Semis) last year left a bit of a bad taste in my mouth. I just wanted to win no matter where I was.”

Leaving his home away from home was a blow made easier by the franchise that grew with Getson during his time there.

“I had talked with Jim Hulton before the trade period and I knew it was a possibility,” he explained. “It was definitely tough. I was so comfortable there. I knew so many people. The organization was like family to me.”

“They made it a lot easier for me to make the move and come home.”

Knocking on the (Front) Door

After the heartbreak of losing to the Blainville-Boisbriand Armada in Game 7 of the President Cup Semi-Finals last year, Getson’s resolve only strengthened. And make no mistake, even though the Mooseheads have known for the past 13 months that they will be competing in this year’s Memorial Cup, getting there as a league champion is the primary focus.

When Xavier Parent scored just over two minutes into overtime in Game 6 of the Mooseheads Semi-Final series with the Drummondville Voltigeurs, a goal that was set up by Getson himself, it may have proved to be a seminal moment in the club’s desire to be the top team in the QMJHL postseason.

“We’ve been focusing on the task at hand,” Getson said. “We don’t just want to go into the Memorial Cup as the host team. We want the President Cup, too. When we beat Drummondville, it definitely motivated us to keep going against Rouyn-Noranda.”

Home. It’s a word that means many things to many people. It’s the comforts, the familiarities, the sense of security. When we are home, we feel better. We live better. We sleep better.

Keith Getson is no exception. Being at home simply feels good. However, he’s clearly not resting on his laurels. If anything, it’s the atmosphere of all that is familiar, even after so much time away, that keeps him awake and driven towards his ultimate goal.

“The fans in Halifax have been unbelievable,” Getson remarked when asked about moments like the clincher against Drummondville, or an energetic Game 4 Finals win over the Huskies. “The atmosphere has been absolutely crazy. It’s been surreal for me to be able to come home and live this. It’s been amazing.”

Now that he’s reacquainted with all the nuances of home once more, there’s only one thing left for Getson and his Mooseheads teammates to do.

Bring down the house.