Alexis Shank is the VAUGHN Goaltender of the Month – October 2018 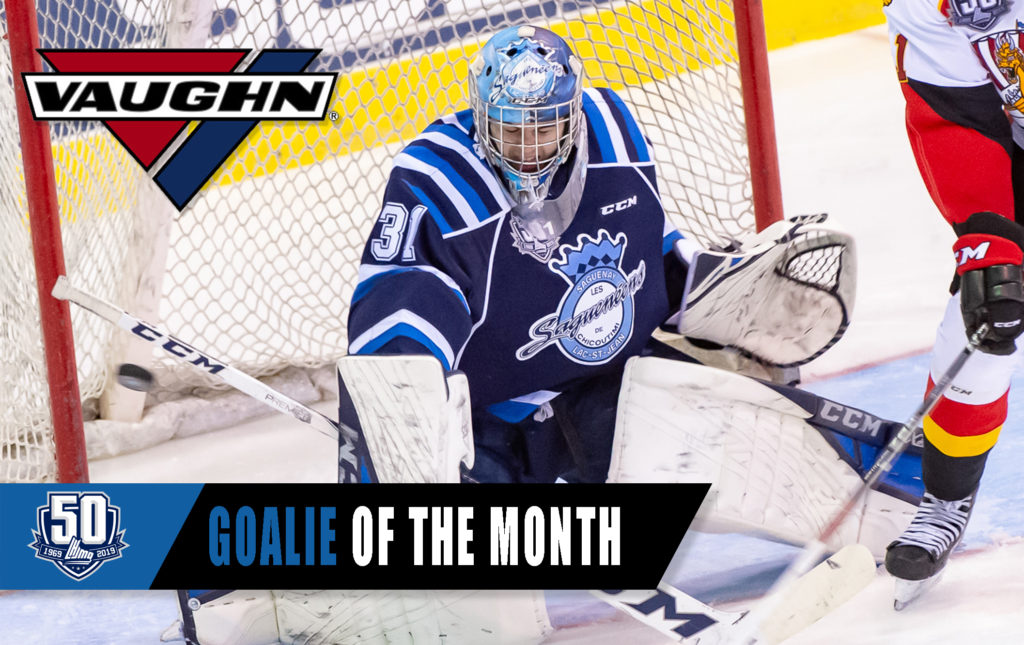 BOUCHERVILLE, November 1, 2018 – The Quebec Major Junior Hockey League announced today that Alexis Shank is the VAUGHN Goaltender of the Month for October.

It is hard to find a better start to a season than the one that the Chicoutimi Saguenéens netminder is having. He currently leads all QMJHL netminders with his goals against average (1.42), his save percentage (0.947%) and shutouts (2).

In the eight games he’s started this season, Shank has won five of them, lost twice in the shootout and skated away with his only regulation loss in his very first game of the year. He also stepped in for Zachary Bouthillier when the veteran was pulled back on October 13th and didn’t allow a goal during his time in net.

Shank has also shown tremendous consistency throughout the first month of the season. Despite facing an average of 27 shots per game, the 18-year-old has not finished a game with a save percentage below 0.900% and has allowed two goals or less in six of his outings.

With Bouthillier struggling in the season’s early going (2-3-1-1 / 4.03 / 0.880%), Shank’s strong play has helped the Saguenéens remain in the upper half of the League’s overall standings. Chicoutimi currently sits in seventh place with a 7-4-1-3 record and trails the Rouyn-Noranda Huskies only by a single goal for the least goals against in the QMJHL with 42.

After dominating the Midget AAA ranks and mastering his craft behind Bouthillier in his rookie season, Shank is off to a tremendous start in his sophomore season and will look to build off his momentum throughout the month of November.