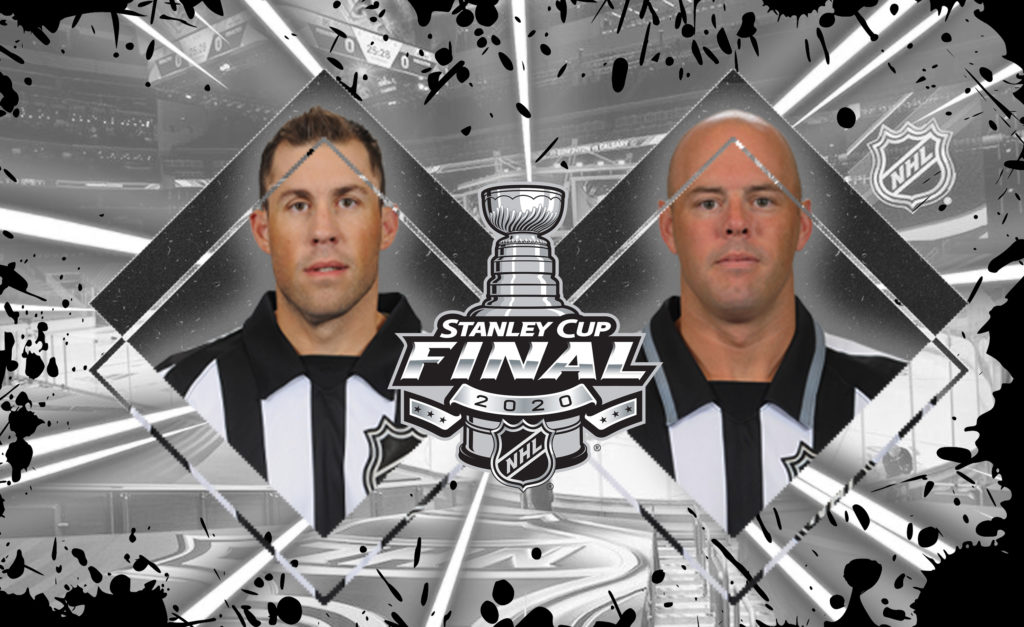 The 2020 Stanley Cup Final is nothing short of a showcase for the QMJHL. Whether on the ice, behind the bench or in the front office, both the Dallas Stars and Tampa Bay Lightning are well represented with league alumni in one way, shape or form. That trend continues into the Officials’ Room as two gentlemen who rose through the ranks in the “Q” are now putting in time at the peak of their profession.

Francis Charron first appeared in a QMJHL contest as a linesman during the 2002-03 campaign. The following season saw him wearing the orange armband for the first time at the major junior level. It was the start of what would become a relatively short stay as a referee in the league. Within four years of his debut, he was working games at the 2006 Memorial Cup in Moncton, the first of three straight tournaments for the 37-year-old from Ottawa. He would compliment this work with several international appearances including the 2004, 2007 and 2008 IIHF World Junior Hockey Championship. Charron would graduate from the league in 2009, following 328 regular season and playoff contests.

Since joining the NHL’s officiating fraternity in 2010, Charron has accounted himself every bit as well as he did in the QMJHL. This includes being named one of the referees for the 2019 Winter Classic in South Bend, Indiana, one of 544 regular season games he has worked. A postseason mainstay since 2014, it was his 47th and most recent playoff game that may very well go down as his most memorable to date, however. That took place on Saturday night when Charron took to the ice to officiate Game 1 of the 2020 Stanley Cup Final, his first appearance in the NHL’s championship series.

Much like Charron, linesman Matt MacPherson’s time in the QMJHL can be described in two words; “short” and “successful”. The 37-year-old from Antigonish, Nova Scotia first hit the ice as a league official in 2005. Six years and 121 regular season and playoff games later, it was MacPherson’s turn to reach the game’s top league. Since making his debut in the fall of 2010, the man who wears #83 on the NHL lines has gone on a swift journey toward the top of the NHL officiating group. taking to the ice for 611 regular season and 45 postseason matches to date.

In an interesting parallel to Charron, MacPherson also made his playoff officiating debut in 2014 and was on the lines for the above-mentioned Winter Classic in 2019. And, just like Charron, he was on the ice for Game 1 of the 2020 Stanley Cup Final, his second championship appearance after donning the stripes during the 2018 Final.

The QMJHL congratulates Francis and Matt on their prestigious assignments and wish them all the best in this year’s Final.