A Champ for the Champs

Océanic NHL Draft
by
Will MacLaren 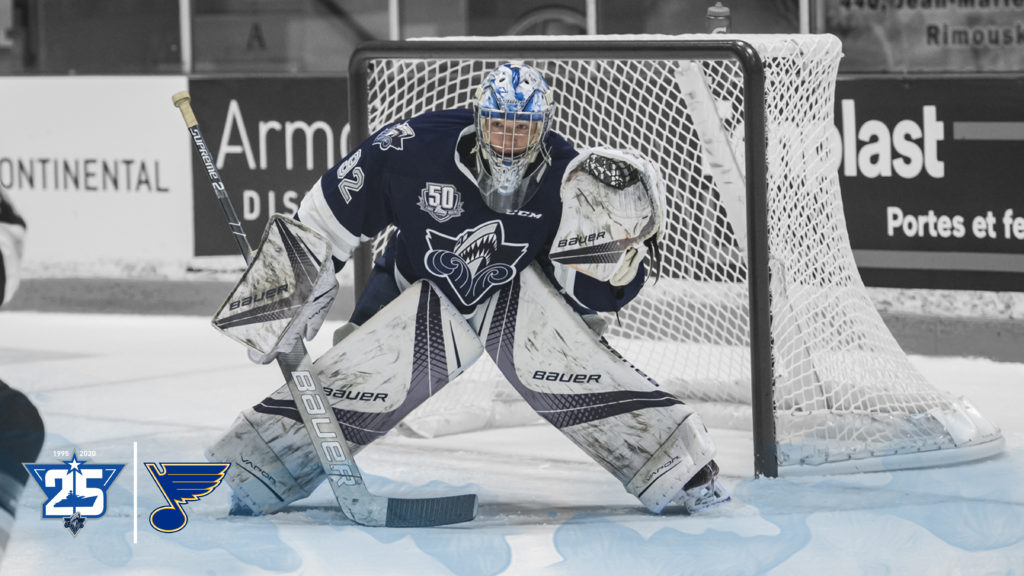 On June 12th, the St. Louis Blues, the worst team in the NHL just over six months earlier, skated off the ice at TD Garden in Boston with family, friends and a 35-pound silver trophy that represents possibly the most recognizable symbol of achievement in sports.

In going from stale to Stanley in the shortest timeframe ever, the Blues can rightfully boast of knowing a thing or two about shaking things off and moving forward.

So then, it could only be considered perfect symmetry when, at the NHL Entry Draft ten days later, the organization took to the microphone with the final pick of the third round and snagged a player that has started to make the hockey world take notice for his ability to move forward under difficult circumstances.

Colten Ellis grew up in the community of Whycocomagh, Nova Scotia (Population: 854). Nestled along the banks of Bras d’Or Lake on picturesque Cape Breton Island, it was here that he rose through the local hockey ranks as a standout netminder. It was a rise that would perpetually accelerate; the more pucks he stopped, the more heads he turned.

Ellis has been an All-Star, Champion, or both at every level. Be it with the major bantam Nova Jr. X-Men, the major midget Cape Breton West Islanders where he backstopped the club to a Telus Cup title, the first such honor bestowed upon any Maritime team, or the Rimouski Oceanic, with whom he was named Defensive Rookie of the Year in 2018. By the time the 18-year-old received his introduction to the NHL as a Blues draftee, he had experienced more in the game before reaching voting age than most do in an entire career.

But when asked about his latest accolade, the first thing Ellis mentions is where it all began.

“Every kid dreams of being drafted and eventually playing in the NHL,” he said. “It (felt) pretty surreal, actually. To hear your name called and to receive the support of your family and the community is hard to put into words.”

By this point, you might be hard pressed to find the correlation between the Blues and Ellis when it comes to rising from adversity. At face value, young Colten has led nothing short of a charmed career.

As is typically the case however, there is more to the story than meets the eye.

In the spring of 2016, Ellis was highly touted. An early selection in that June’s QMJHL Draft seemed a foregone conclusion. Even though his numbers were, for him, below average (3.70 GAA, .890% save percentage during the regular season and a 5.84 GAA, .810% save percentage in two playoff games), these figures could easily be caulked up to a 15-year-old first-year midget player, stepping into the most demanding position on the ice, for a club that was in the lower third of the league standings.

However, Ellis will be the first person to tell you that those numbers only told a part of the story.

“I let (the pressure) get to me heading into the QMJHL Draft,” Ellis, who was eventually drafted in the fourth round that year, explains. “It hurt my game. Going into the NHL Draft, I learned from that experience and changed my approach.”

But changing one’s approach is easier said than done. The Blues did it by hanging the Head Coach tag on Craig Berube after the dismissal of Mike Yeo. Ellis, too, did it with a personnel change.

“I have to credit (Halifax sports psychologist) Chris DeWolfe, who really helped things after I got drafted in the “Q”,” Ellis said. “The main thing for me was just focusing on the game and on what I can control and Chris was the guy who taught me how to do that.”

Not only has his time with DeWolfe allowed Ellis to maintain his focus amidst sometimes plentiful distractions, it has created an entirely new perspective; one that has already impressed the NHL club that recently welcomed him to their fold.

Blues’ Goaltending Development Coach Dave Rogalski can spend as much time as you’d like heaping superlatives on the organization’s latest netminding find.

“He makes timely saves,” Rogalski said. “When he’s really on, his compete is high and his hockey sense is showcased. His puck handling is spot on. He’s a young professional. Just a really good, polite kid that soaks up information. When he turns pro, he’ll know how to carry himself. In the room, he’s so relaxed. Just one of the guys.”

But, again, there’s more to it. Lots of players at all levels are competitive. They can grasp the fundamentals of their position with a high degree of success. They’re good in the room. But there’s always something else that separates the truly special players. What might that be for Colten Ellis?

Again, an easy question for Rogalski.

“What we really liked was the fact that when he’s playing average, he can quickly regroup and focus on making saves and finding a way to win,” he concludes.

Rogalski knows whereof he speaks. Thanks to an early February game against a division rival of Ellis’ Oceanic, he has a first hand account to prove it.

“I saw him in a game this past winter against Chicoutimi,” he recalls. “He played an okay game through two periods. It’s not that he was playing particularly bad, it’s just that things weren’t going as smoothly as he would’ve liked. He came out in the third and was fantastic. He showed a lot of resilience and helped get his team that win.”

“I spoke with him the next day about that game”, Rogalski continues. “He’s such a great communicator and, to me, that’s so important. He can tell you the details of every goal scored against him, but doesn’t allow it to get to him. He was just happy that the team got the win and moved on.”

“He can analyse his game but still doesn’t grip the stick too tightly. He so good at self-educating.”

Self-education notwithstanding, nobody needs to tell Ellis that the Oceanic are on the precipice of what should be a memorable season. With a team slated to be among the most competitive in the QMJHL and a world class talent in teammate Alexis Lafreniere, who’s about to embark on his own NHL Draft campaign, the soon to be third-year veteran between the pipes will need every bit of tutelage he’s acquired so far to manage the expectations bestowed upon both him and his team.

Whycocomagh’s finest is using all of his past experiences, gained in Cape Breton, Rimouski, St. Louis and countless outposts in between, to guide him.

“You’re always going to run into pressure-packed situations,” Ellis commented. “There’s going to be a lot of hype. Going into my 19-year-old season, I’ll be a leader and we should have a very good team. I just want to do everything I can to help the team win and not get caught in that hype. I feel I can draw on my national championship experiences (in midget) as we go into this year with the team we have.”

It’s little wonder the Blues were interested in welcoming a guy like this into their fold. After all, sometimes it takes a champion to recognize a champion.