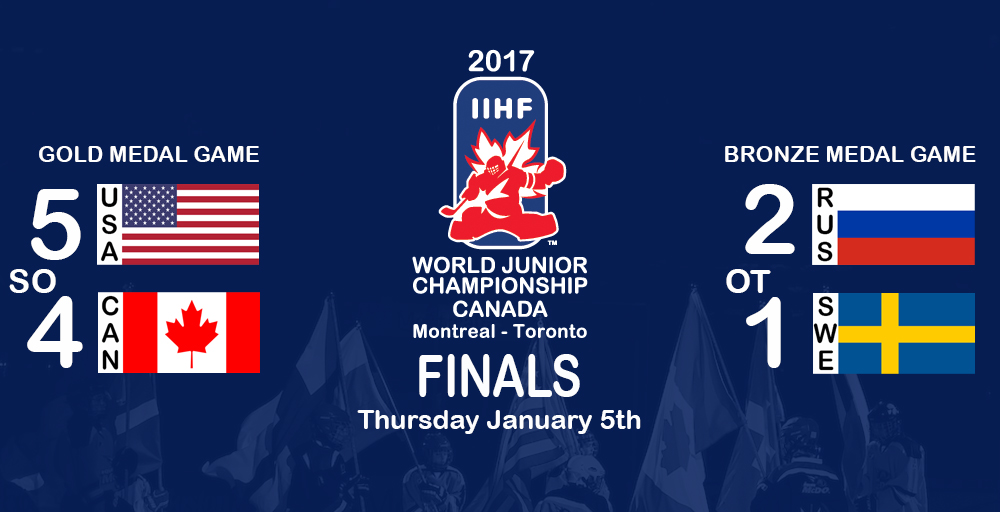 A total of 26 CHL players, eight from the Quebec Major Junior Hockey League, have won medals at the 2017 IIHF World Junior Hockey Championship that wrapped up in Montreal on Thursday. Jeremy Bracco (Kitchener Rangers), Caleb Jones (Portland Winterhawks) and Tyler Parsons (London Knights) won gold in a 5-4 Team USA shootout win over Canada, closing the book on another memorable matchup between the two North American rivals. Here’s a look at Thursday’s Gold and Bronze Medal Games in Montreal.

CANADA 4 – Shootout (Gold Medal Game)
MONTREAL – Calgary Flames prospect Tyler Parsons (London Knights) made 46 saves and proceeded to turn away all five shooters he faced in the shootout as the United States claimed gold with a 5-4 victory at the Bell Centre. The back-and-forth clash between North American powers saw the two sides treat a capacity crowd in Montreal to another great installment of their historic rivalry.

First period offence came from the defence as Thomas Chabot (Saint John Sea Dogs) and Jeremy Lauzon (Rouyn-Noranda Huskies) both put pucks past Parsons to give Canada a 2-0 lead after one frame. The U.S. fought back in the second as Charlie McAvoy and Kieffer Bellows knotted the score at two. The game entered the third period in a 2-2 tie with Canada leading the shot clock 21-19.

A wild four-goal third period saw both clubs score twice as Canada jumped ahead 4-2 on markers by Nicolas Roy (Chicoutimi Sagueneens) and Mathieu Joseph (Saint John Sea Dogs). The Americans would respond again though, eliminating another two goal deficit as Bellows scored his second of the night followed by a goal from Colin White to knot the game at four.

Like their last gold medal clash in 2010, overtime would be required but wouldn’t solve anything as Canada outshot the U.S. 50-36 through 80 minutes of play before a shootout ensued.

Team USA’s Troy Terry followed up on his semi-final heroics that saw him score three shootout markers against Russia, putting one through the legs of Carter Hart (Everett Silvertips) before Parsons denied Roy to clinch victory for the United States.

The fifth gold medal matchup between Canada and the United States didn’t disappoint as the Americans won their fourth gold in tournament history and first since 2013 in Ufa, Russia.

Canada earns its ninth silver medal in World Junior history and first since 2011 in Buffalo.

SWEDEN 1 – Overtime (Bronze Medal Game)
MONTREAL – Dallas Stars prospect Denis Gurianov scored 33 seconds into overtime to give Russia a bronze medal finish at the IIHF World Junior Hockey Championship, defeating Sweden 2-1. The Russians earn a medal at the World Juniors for the seventh straight year, a streak that includes gold (2011), three silver (2012, 2015, 2016) and three bronze (2013, 2014, 2017). The Russians were outshot 39-26, but goaltender Ilya Samsonov turned in a 38-save performance to earn Player of the Game honours. Sweden finishes fourth in the tournament and hasn’t earned a medal since 2014 when they claimed silver on home ice in Malmo.