8 Players to Watch at the 2020 University Cup 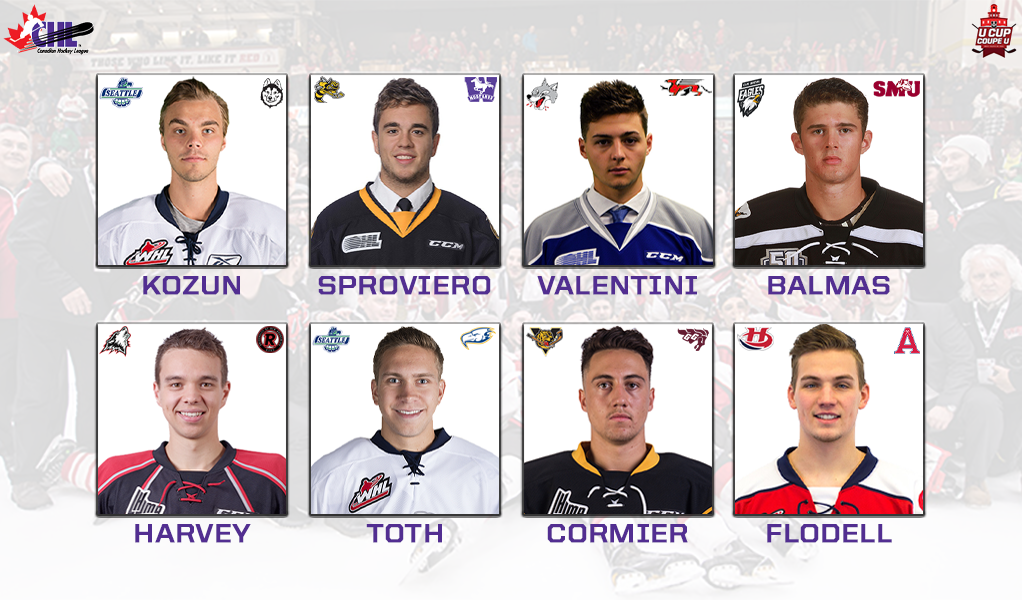 The puck drops for the 2020 U SPORTS University Cup on Thursday in Halifax, N.S., marking the beginning of a four-day, eight-team tournament that counts this year’s three conference winners including the defending national champion UNB Reds among the teams competing.

With tournament action about to get underway, and with 165 Canadian Hockey League graduates decorating the rosters of the participating squads, here are eight players to watch in this year’s edition:

Taran Kozun – The first U SPORTS athlete to win both Player of the Year and Goaltender of the Year honours in the same season, the Saskatchewan Huskies netminder put together an impressive All-Canadian campaign in which he led Canada West in wins (17), save percentage (.931), goals-against average (1.87), and shutouts (5) to earn recognition as a dual conference award winner earning Goaltender of the Year in addition to Player of the Year honours. Kozun, 25, spent three seasons in the WHL from 2012-15, suiting up for the Kamloops Blazers and Seattle Thunderbirds.

Franco Sproviero – Skating in his debut campaign with the Western Mustangs, Sproviero was an invaluable performer for his new club as he collected a team-leading 33 points counting 14 goals and 19 assists through 24 games to finish fifth in Ontario University Athletics scoring and first among freshmen. For his efforts, Sproviero earned Rookie of the Year honours for the OUA’s West Division. The 21-year-old joined the Mustangs in 2019-20 following three full seasons spent with his hometown Sarnia Sting from 2016-19.

Ryan Valentini – The Guelph Gryphons forward enters the year-end tournament with one accolade to his name already after earning a spot on the Second All-Star Team representing the Ontario University Athletic’s West Division following a solid showing where he finished above a point-per-game pace and tied for second in team scoring in tallying 15 goals and 24 assists through 28 appearances. Valentini, who split his OHL playing days between the London Knights and Sudbury Wolves from 2014-17, now hopes to add one more award to his trophy case.

Mitchell Balmas – After leading the Cape Breton Eagles in scoring last season with 82 points through 64 appearances, the Nova Scotia native carried over his offensive acumen to his first season with the Saint Mary’s Huskies in registering a team-leading 43 points counting 17 goals and 26 assists across 27 contests to earn the A.J. MacAdam Trophy, presented annually to the Rookie of the Year from Atlantic University Sport. Balmas, 21, who also earned top U SPORTS rookie honours, joined the Huskies following five seasons in the QMJHL spent with the Charlottetown Islanders, Gatineau Olympiques, Acadie-Bathurst Titan, and Eagles.

Samuel Harvey – Capping off his junior career last season in hoisting the Memorial Cup with the Rouyn-Noranda Huskies, Harvey has another chance at a title this spring, coincidentally again in Halifax, as part of the defending champion UNB Reds. In his first season with New Brunswick, it was another successful showing for Harvey who found the win column in all but two of his 16 appearances while finishing second among all Atlantic University Sport goaltenders in goals-against average (1.87) and save percentage (.912). Harvey, 22, spent his entire QMJHL career with the Huskies, spanning from 2014-19.

Rylan Toth – Owning a hockey resume with no shortage of accolades, Toth aims to guide the UBC Thunderbirds to the winner’s circle at the U SPORTS University Cup, much like he did in 2017 when he helped the Seattle Thunderbirds claim the Ed Chynoweth Cup, presented to the WHL champion. This season, Toth has picked up eight wins with UBC alongside a steady 2.78 goals-against average and .902 save rate. Toth, 23, skated in the WHL from 2014-17, a stretch that included back-to-back appearances in the Memorial Cup with the Red Deer Rebels and Thunderbirds.

Dominic Cormier – Among the many recognizable names skating with the Ottawa Gee-Gees is former Victoriaville Tigres defenceman Dominic Cormier, whose QMJHL career spanned from 2015-19 and also counted a stint with the Rimouski Oceanic. This season, Cormier has put together a solid showing in his debut campaign with the Gee-Gees, notching 20 points counting three goals and 17 assists across 27 appearances to finish tied for fifth in scoring among all Ontario University Athletics blue-liners as well as tied for first in scoring among rookie rearguards.

Logan Flodell – Rounding out the top players to watch, the Acadia Axemen goaltender skates into the year-end tournament after recently earning the Kelly Trophy, presented each season to Atlantic University Sport’s Most Valuable Player. The recognition comes following a formidable campaign in which Flodell led all conference netminders in wins (16) and save percentage (.918). Wrapping up his sophomore season with the Axemen, Flodell joined the squad following 161 career contests in the WHL split between the Seattle Thunderbirds, Saskatoon Blades, Swift Current Broncos, and Lethbridge Hurricanes.