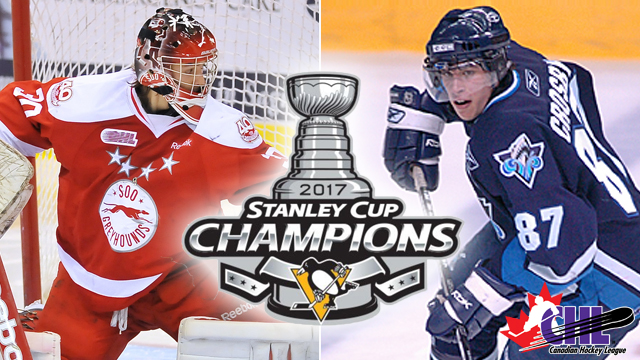 15 CHL graduates are Stanley Cup champions with the Pittsburgh Penguins following a 2-0 Game 6 road win over the Nashville Predators on Sunday.

After defeating the San Jose Sharks last year, the Penguins become the first team since the 1997 and 1998 Detroit Red Wings to win back-to-back Stanley Cup titles. Their 49 playoff games in a span of  two years are the most of any team in NHL history.

Rimouski Oceanic graduate Sidney Crosby was awarded the Conn Smythe Trophy as the MVP of the NHL Playoffs for the second straight year. Crosby joins other CHL grads in Philadelphia Flyers goaltender Bernie Parent (1974, 1975) as well as Penguins legend and current team president Mario Lemieux (1991, 1992) as the third back-t0-back recipient of the award in NHL history.

Crosby finished second in NHL playoff scoring with eight goals, 19 assists and 27 points in 23 games. He recorded a goal and six assists in the Stanley Cup Final.

“We had injuries all year and through the playoffs,” said Crosby after hoisting the Stanley Cup. “Everybody understands when you get this far you have to get through some adversity. We knew it was going to be tough to get back here but we found a way.”

“It’s all gone by pretty quick, but it’s pretty special to go through what we did,” he added. “We found out just how tough it is to do this, but it’s a great feeling.”

Six of the 15 CHL graduates on Pittsburgh’s playoff roster saw action in the NHL Playoffs including goaltenders Marc-Andre Fleury and Matt Murray. Fleury started the postseason when Murray went down with an injury. The Cape Breton Screaming Eagles grad went 9-6 with a 2.56 goals-against average and a .924 save percentage to capture his third Stanley Cup. Sault Ste. Marie Greyhounds grad Matt Murray won his second straight cup, going 6-3 with a 1.70 goals-against average, a .937 save percentage and three shutouts including a 27-save shutout in Game 6.

Other CHL graduates in Trevor Daley (Sault Ste. Marie Greyhounds) and Olli Maatta (London Knights) were key contributors on an unheralded Pittsburgh blue line that persevered despite missing star defenceman Kris Letang (Val-d’Or Foreurs) through the second half of the season and entire playoffs due to injury.

The Penguins were directed by key CHL graduates off the ice as general manager Jim Rutherford, who was an OHL GM and head coach between Windsor and Detroit from 1984-94, was the architect of the championship roster.

Renowned Penguins owner and holder of multiple QMJHL records Mario Lemieux hoisted the Stanley Cup for the fifth time in his career, following titles as a player in 1991 and 1992 and two as an owner in 2009 and 2016.

Assistant coach Jacques Martin was an assistant with the Peterborough Petes from 1983-85 before coaching the Guelph Platers to an OHL championship and Mastercard Memorial Cup title in 1986.

Fellow Penguins assistant Rick Tocchet played for the Sault Ste. Marie Greyhounds from 1981-84 before an 18-year NHL playing career that saw him win a Stanley Cup title with the Penguins in 1992.

Pittsburgh’s path to glory included a 4-1 first round series victory over the Columbus Blue Jackets, a 4-3 second round series win over the rival Washington Capitals, a thrilling 4-3 Eastern Conference Final win over the Ottawa Senators that required double-overtime in Game 7 and a 4-2 Stanley Cup Final triumph over Nashville.