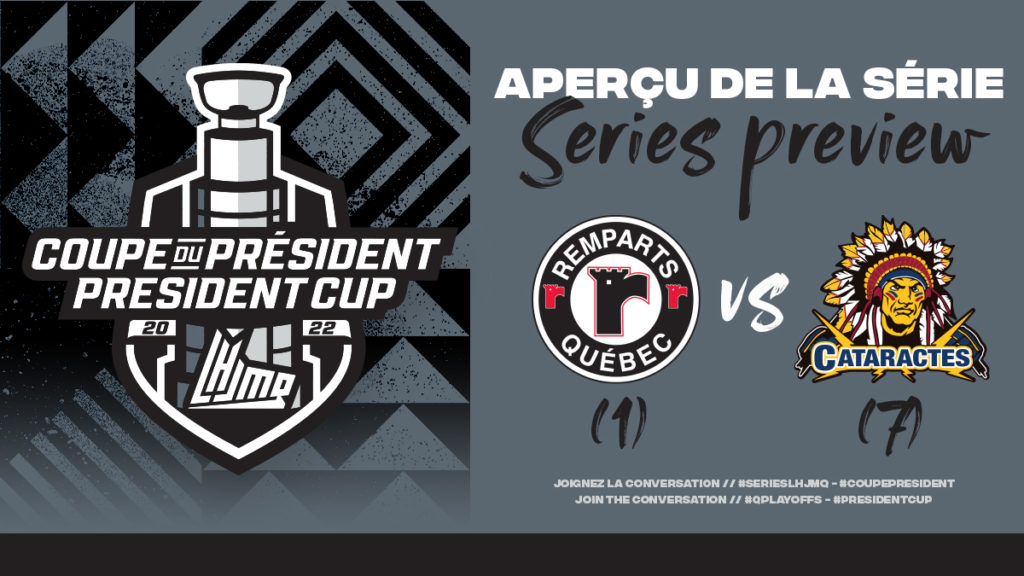 The regular season champs collide with a team that has achieved playoff perfection so far as the Quebec Remparts host the Shawinigan Cataractes in Game 1 of a best-of-five President Cup semifinal. The action begins at Videotron Centre on Wednesday night.

The Remparts have won six of their first seven postseason encounters. After a clean sweep of the Chicoutimi Sagueneens in round one, the club took out another East Division rival, the Rimouski Oceanic, in four contests.

A 55-goal scorer in the regular season, Zachary Bolduc has continued his torrid pace into the first two rounds, leading the club in goals (7) and points (11). Highly touted 2022 NHL Draft prospect Nathan Gaucher continues to produce at a point per game clip, while veteran rearguard Nicolas Savoie continues to lead the blueline along with Louis Crevier. Fabio Iacobo and William Rousseau continue to share duties in net entering round three, a recipe that has proven successful for Head Coach Patrick Roy, who’s club enters the semis after allowing just 14 goals through seven games.

This is the organization’s first foray into the third round since 2015, when it went all the way to the President Cup Final.

The Cataractes won their first game of the postseason against Rouyn-Noranda and haven’t looked back since, coming off back-to-back sweeps of the Huskies and Gatineau Olympiques. Not only have the Cataractes gone undefeated, they’ve also shown the ability to win in any style, be it a shootout or a defensive battle.

Dallas Stars prospect Mavrik Bourque leads the team in scoring (12 points), having been involved on all three game-winning tallies in the Gatineau series. Fellow NHL first-rounder Xavier Bourgeault has posted 11 points through two rounds, while veterans Olivier Nadeau and Pierrick Dube have contributed at keys times. On the back end, Jordan Tourigny and Zachary Massicotte continue to lead the charge, as Antoine Coulombe and Charles-Antoine Lavallee continue to shut the door in the crease.

This will be the first time the Cataractes have reached the semis since their President Cup Final run in 2016.

The Remparts held a 3-2 edge in the season series against the Cataractes, with two of those games going beyond regulation. This will be the fourth encounter between these two clubs in postseason competition and the first in 11 years. The Remparts gained the upper hand in 2006 and 2011, while the Cataractes earned victory in 2009.

The Remparts will be itching to hand their semifinal rivals their first taste of defeat in these playoffs. However, if the first two rounds have been any indication, the Cataractes will be making sure that task does not come easy.
_
Team Comparison: