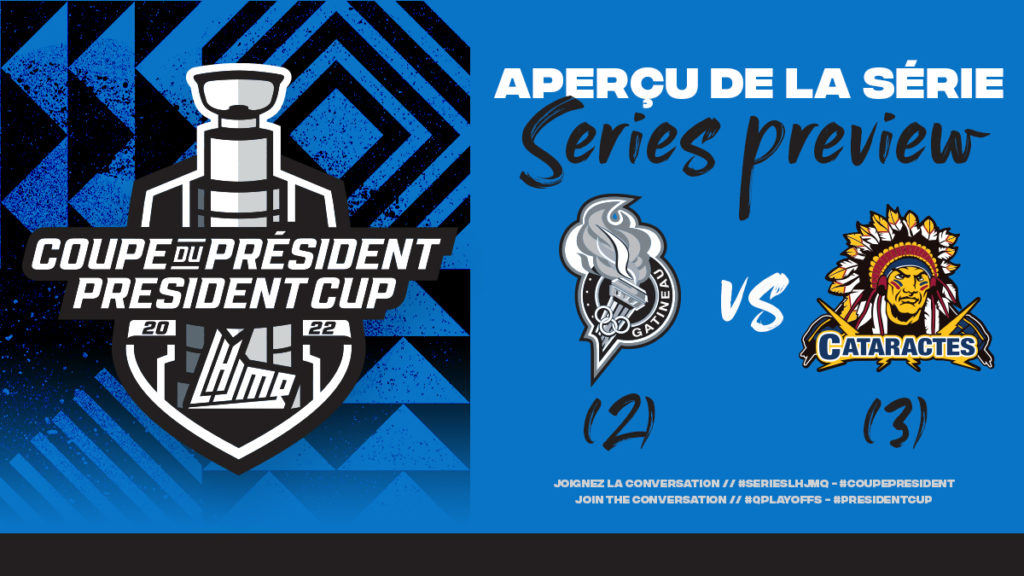 Over 100 years of QMJHL history prepare to face off in round two when the Shawinigan Cataractes take on the Gatineau Olympiques in a best-of-five President Cup quarterfinal series. The action begins Sunday in Gatineau.

The Olympiques dropped the initial game of their first-round series to Val-d’Or before reeling off three straight victories to advance. Scoring 18 goals in a trio of triumphs, all cylinders were firing offensively for Gatineau, led by six points from Zachary Dean. However, it was the balanced Olympiques attack that outmatched the Foreurs, as the club featured eight players with at least a point per game and goals from eleven different skaters.

While Tristan Luneau and Isaac Belliveau continued to drive the bus defensively, the steady netminding of Remi Poirier made a significant difference, coming up with several key stops throughout the series. This was the Olympiques’ first series win in six years. They’ll now be aiming for their first trip to the league semifinals since 2011, when they reached the President Cup Final for the tenth time in their storied history.

The Cataractes slayed the demons of recent playoff performances, taking their opening round clash with the Rouyn-Noranda Huskies, their first series sweep in a decade. The high-octane duo of NHL first-round draftees Xavier Bourgeault and Mavrik Bourque was key to the victory, both players combining for five goals and 12 points.

However, one of the bigger impressions in the series came from the play of reliable rookie defenseman Jordan Tourigny. Angus Booth put together a strong trio of games, culminating in the series-winner in overtime of Game 3. When called upon, the duo of Antoine Coulombe and Charles-Antoine Lavallee came up big, holding the Huskies to just four goals. Shawinigan will be vying for its first trek to the semis since 2016, a run that eventually led to a berth in the President Cup Final.

The Olympiques captured the season series from the Cataractes with four wins in six games. Both Shawinigan triumphs occurred beyond regulation. This is the sixth time these two clubs will take on one another in postseason action; the Olympiques were victorious in 1986, 1999 and 2008, while the Cataractes took the most recent of these encounters in 2009. The two teams were also part of a quarterfinal round robin format back in 1982.

The stars will be shining in Gatineau and Shawinigan as two teams, both at the top of their games and both on a mission, do battle with one another. You’ll not want to miss a minute of this one!
_