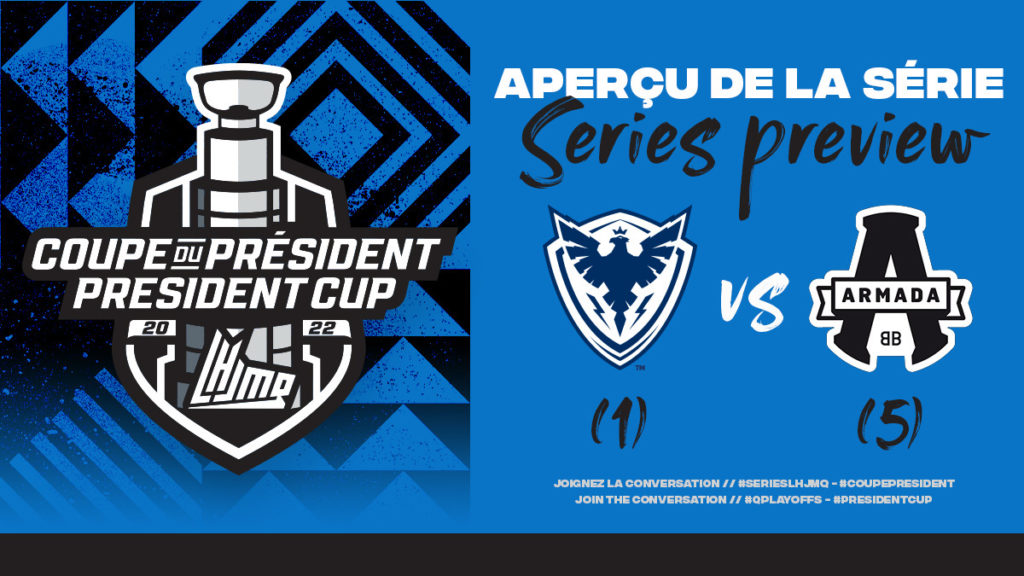 The Sherbrooke Phoenix and Blainville-Boisbriand Armada represent the two most recently incorporated franchises in the QMJHL. Now, they’ll be trying to write some history against one another when the two clubs kick off their best-of-five quarterfinal series on Sunday, in Sherbrooke.

The Phoenix, regular season champion of the Western Conference, eliminated the Baie-Comeau Drakkar three games to one in the opening round of the playoffs. After taking a commanding 2-0 series lead, outscoring the Drakkar 11-1 in the process, the Phoenix persevered through a Game 3 overtime loss and another one-goal decision in Game 4 to advance to the second round for the third time in the past four postseasons.

Just as in the regular season, Joshua Roy and Xavier Parent led the way offensively, finishing the first round with a combined 22 points. Julien Anctil, the third member of this potent trio, led the club with five goals, including two game-winners. In net, Jakob Robillard recorded all three victories for the Phoenix, including a playoff opening 7-0 shutout. The Phoenix is seeking its first trip to the league semifinals since the franchise was founded in 2012.

The Armada faced a formidable challenger in the Drummondville Voltigeurs, taking the series in four games after dropping the opener. Overager Kieran Craig ensured his junior career would continue into round two by leading the club in scoring. Impact import Oleksiy Myklukha posted seven points in the series, while rookie Alexis Bourque put together a strong first-ever playoff series, netting the eventual series winner in Game 4.

Between the pipes, Charles-Edward Gravel finished capped off the opening round ranking fourth in GAA (1.51) and second in save percentage (.953%). As a group, the Armada was locked in on the penalty kill, allowing just one tally over the course of 16 Voltigeurs man advantages. This is the second straight year in which the Armada has punched its ticket to the quarterfinals, falling in round two to the Victoriaville Tigres in a hard-fought best-of-five encounter that went the distance last year.

The season series between these two clubs was very close, each team earning two victories. Both of the Armada’s triumphs required extra time, one in overtime, the other in a shootout. This will be the second postseason encounter between the teams, the first one occurring in 2019, when the Phoenix took down the Armada in a five-game first-round clash.

How will the high-powered Phoenix top line fare against a structured, methodical Armada opponent? This and many other questions will be answered soon enough.
_