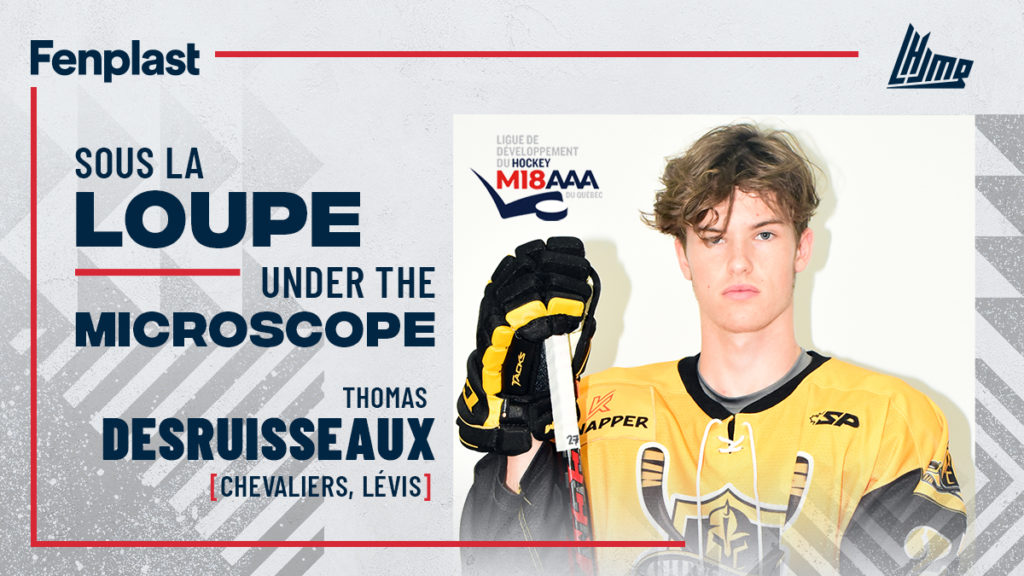 Thomas Desruisseaux just ended his rookie campaign by helping the Lévis Chevaliers reach the finals of Quebec’s U18 AAA League.

During Lévis’ postseason run, Desruisseaux put up 12 points in 14 games and scored a goal in each of the first three games of the final.

The dynamic forward clearly carried the momentum he gained from his first regular season with the Chevaliers into the playoffs. Despite dealing with several injuries and being challenged physically on more than one occasion, Desruisseaux still managed to produce 12 goals and 23 points in 27 games.

Chevaliers head coach Pier-Luc Giguère is especially proud of his young prospect’s success in 2021-22 because he was able to find solutions in the face of adversity for the first time in his young hockey career. These experiences will only help as Desruisseaux continues to progress through the ranks.

The 16-year-old is a proven scorer who thinks offense first. But he has also been working hard on his defensive awareness, to become a more complete player, whose game will translate better at the higher levels.

“Thomas is really quick in tight spaces to generate scoring chances, to free himself up and create space between himself and the player who is chasing him,” explained Giguère. “He has very good hockey sense. With the puck, he’s able to change directions quickly.”

It may be Desruisseaux’s offensive prowess that is making him a hot commodity for this summer’s QMJHL Draft, but it’s the effort he puts off the ice to become the best player he can be that truly sets him apart from his peers. He takes care of himself and leaves no stone unturned when it comes to giving himself the best chance to succeed.

“It’s his passion for hockey and his desire to learn,” Giguère said about what makes Desruisseaux so special. “He loves it so much and wants to improve so badly.”

Talent, combined with a strong work ethic, represents a recipe for success that is going to go a long way in helping Desruisseaux achieve his biggest dreams. And they all start with him playing Major Junior hockey.