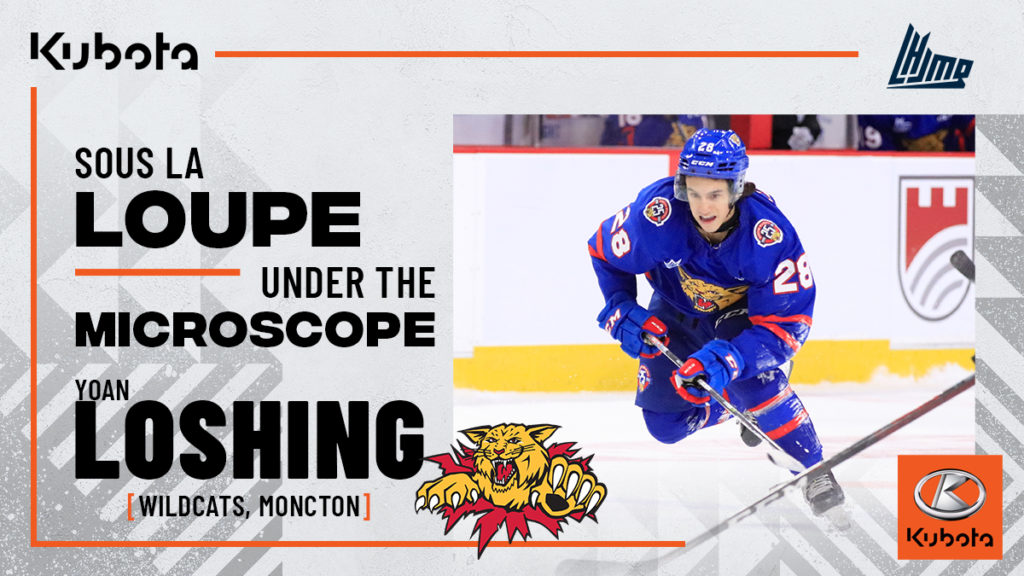 After being the 13th overall pick of the 2020 QMJHL Entry Draft, Yoan Loshing’s career with the Moncton Wildcats got off to a rocky start.

But from February through to the end of the past regular season, he was a different player and showed off all his potential, particularly offensively. The 18-year-old winger finished the 2021-22 campaign with 19 goals and 42 points in 50 games.

He uses his great speed to create space for himself and make life difficult for opposing defenceman by keeping them on their heels. This allows him to get his dangerous shot off, which he likes to use often. Loshing definitely has a shoot-first mentality, and it’s wise not to leave him open for too long because he’ll make you pay.

“He’s someone we all tend to notice with the puck, but he also has skills to go on the forecheck,” explained Wildcats head coach, Daniel Lacroix. “He’s someone who has a physical side to his game, even though he isn’t a player of great stature and even if he’s not imposing.”

Loshing, who played his U18 AAA hockey with the Mississauga Senators, prides himself on being a good teammate. He’s quiet, doesn’t take up a lot of space in the dressing room and focuses on coming to the arena everyday with the goal of putting in the work to improve.

His efforts were rewarded with a strong second half which got him back on the radar of scouts across the NHL. Over the past few months, he produced at the pace that was expected of him when he was made an early draft selection and Lacroix believes that his natural talent will serve him well in the pro ranks.

“He has all the skills to play professionally,” said Lacroix. “I believe that if he continues on his path, he has a good chance of being successful.”

Given that Loshing played his best when it mattered most down the stretch bodes well for his chances of hearing his name called on the draft floor at Montreal’s Bell Centre this weekend.

After all, it’s not how you start that’s important, but how you finish!