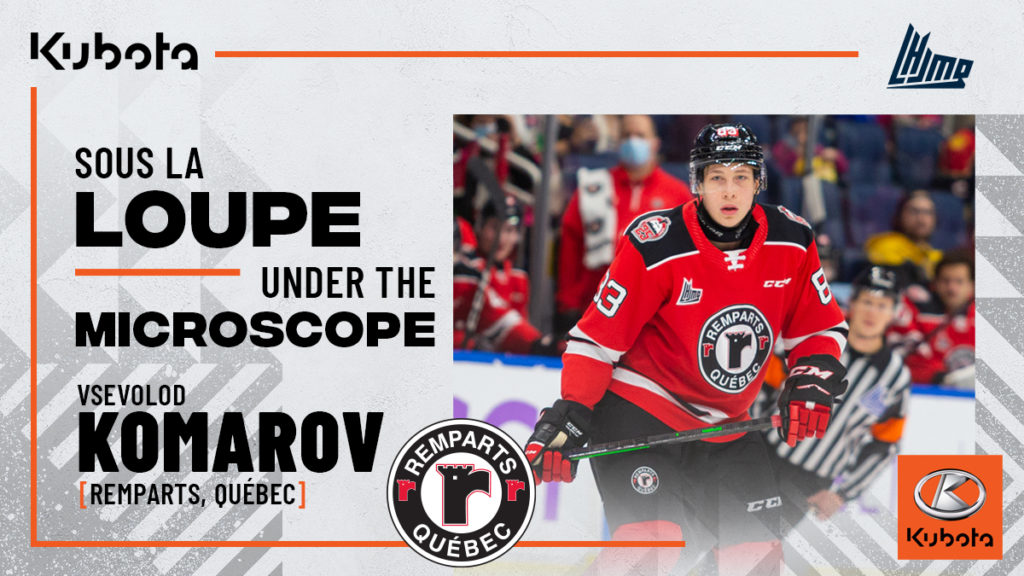 He’s only been in North America since October, but Russian-born Vsevolod Komarov has made a strong first impression with his play and his quick grasp of the English language. The fast-rising 17-year-old defenseman plays a modern game that is catching the eye of scouts ahead of June’s 2022 NHL Entry Draft.

Before arriving in Quebec City to join the Remparts, Komarov spent the 2020-21 season in the MHL, Russia’s Junior Hockey League. After putting up nine points in 46 games with the Stalnye Lisy Magnitogorsk team, the Remparts made him their only selection in the 2021 CHL Import Draft.

Very easy-going by nature, his teammates, coaches, and billet family have nothing but great things to say about him and his ability to learn at a fast pace. On the ice, there are a lot of things to like about Komarov’s game according to Remparts head coach, Patrick Roy.

“Hockey wise, I really love his poise with the puck. He’s very patient, doesn’t get rid of it, moves it very well, rarely makes mistakes on his first pass and defends really well,” Roy explained. “He’s a big, strong kid and I feel like he has a good mix of offense and defense because he’s got those skills with the puck.”

Roy is no stranger to coaching talented Russians and overcoming a language barrier after being behind the bench when Alexander Radulov, now a nine-year NHL veteran, played for Quebec from 2004-2006.

Although the Remparts have several highly touted draft eligible players on the roster this season, Komarov is making sure that he doesn’t fly under the radar and the hockey world is certainly taking notice. With six points in his first 23 games, he has been given a “B” rating in the NHL Central Scouting’s latest rankings and Roy is confident his 6’3’’ blueliner has what it takes to succeed at the next level.

“He needs to get stronger, and his skating has to improve, but he’s got all of the tools,” Roy said. “I think he just needs to keep working on his game. He has a great mindset and I see good things coming for him.”

Roy’s endorsement isn’t surprising considering that Komarov’s style of play and his abilities with the puck are well-suited for today’s NHL. Puck-moving defensemen are a hot commodity these days, which means that Komarov could be a popular name on the draft floor this summer.