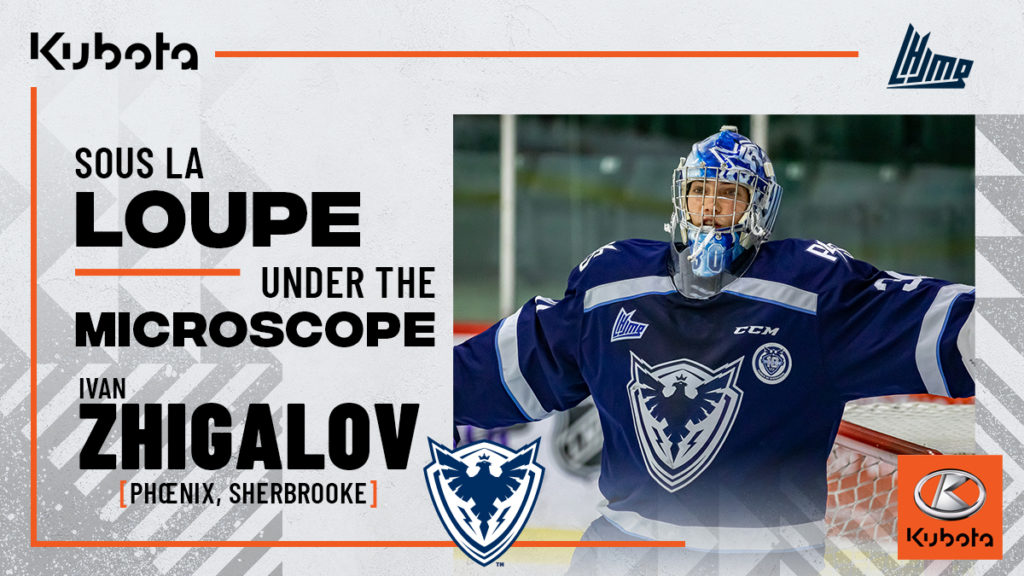 When he arrived in Quebec from Belarus after being selected by the Sherbrooke Phœnix in the 2021 CHL Import Draft, Ivan Zhigalov didn’t speak any English or French.

Fast forward a few months and he has picked up both languages quickly, has adapted seamlessly to a new culture and is loving life in the QMJHL.

He hit the ice for the first time as a figure skater at age four and switched to hockey two years later. The transition was easy since he could already skate well. When asked what position he would like to play, goalie was his choice because he liked the equipment.

The rest, as they say, is history.

Today, Zhigalov is one of the top prospects heading into the 2022 NHL Entry Draft. He’s already won 15 games for the Phœnix in his rookie campaign and was just selected to play in the 2022 Kubota CHL/NHL Top Prospects Game scheduled for March 23. This past fall, the Belarusian was also invited to take part in the Montreal Canadiens’ rookie camp.

The 18-year-old knows that he needs to work on all aspects of his game if he hopes to play professional hockey.

“I’m athletic and I read the game well. I try to be unique, but I am also looking to learn something from all of the NHL goalies,” Zhigalov said. “I really like how Andrei Vasilevskiy plays. I like his style, his speed, and his aggression.”

Phœnix head coach Stéphane Julien indicated that Zhigalov has had to make several adjustments since playing on the smaller North American ice for the first time. European goaltenders tend to stay in their net, so he’s learning that he can be more aggressive and play the puck more often.

The coaching staff is also helping him with his fitness and mental strength, and how to better manage his energy since he’s not used to playing so many games. Julien assures that his goaltender is progressing very well and that he has all the tools to succeed at the next level.

“He already has the size to be a good goalie at the next level. He’s got extremely quick feet, like the new style of goalies that you see in the National League, who move quickly,” Julien explained. “He’s a guy who’s calm in front of his net, he’s smart in his movements, he reads the game well, so I think he’s really a new generation goalie.”

Zhigalov’s move to North America has been an impressive success story so far and it appears that his eventual transition to the professional ranks, hopefully in the NHL, could be just as fruitful.