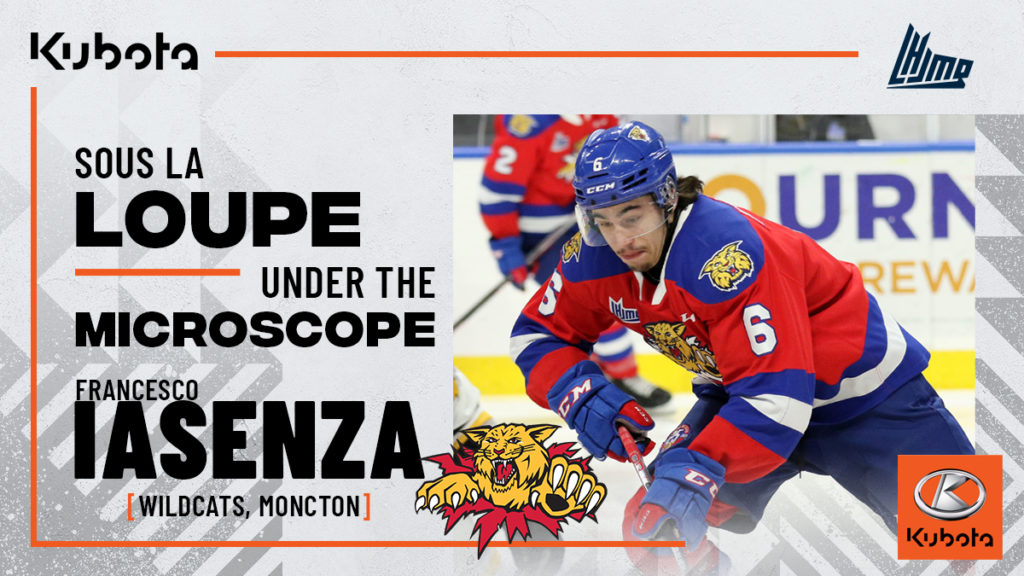 Hockey has always been a family affair for Francesco Iasenza, and the QMJHL has been a big part of his life ever since he was a kid.

Today, after two years of standout play with the Moncton Wildcats, he’s on the verge of realizing every young player’s dream of being drafted in the NHL.

Iasenza’s dad, Giovanni, played in the QMJHL from 1985-1988 with Drummondville and Laval. He was a centre while his son is a mobile defenseman, who plays a solid two-way game. The Iasenza’s were also a billet family and welcomed Daven Castonguay into their home during his four-year tenure in the Q. During that time, Castonguay imparted a lot of valuable wisdom onto a young Francesco about what to expect in Major Junior hockey, which meant he was well-prepared when the Wildcats selected him in the third round of the 2020 QMJHL Draft.

During his time in minor hockey with the Lac St. Louis Lions, several of his coaches compared Iasenza’s game to that of Torey Krug.

“I can play both sides of the ice, as much offensively as defensively,” explained the young blueliner. “I play very physical in the corners in the defensive zone. In the offensive zone, I can create plays and put pucks on net.”

Poised with the puck, the 17-year-old has a knack for keeping it simple and often making the right play. He has a smooth-skating stride that allows him to cover lots of ice and utilize his long reach. He also has a high compete level which makes him tough to play against. Wildcats head coach Dan Lacroix considers Iasenza to be somewhat of a throwback player, with a similar style to the type of defensemen that dominated the sport 20 years ago.

“He’s a guy who takes pride in defending his net with intensity, but who is also good with the puck in transition and in his zone exits,” Lacroix said about Iasenza. “He’s a player who plays a 200-foot game. He’s used in all situations.”

Iasenza has progressed significantly since joining the QMJHL and is now projected to be a potential late-round pick in this summer’s NHL Draft, based on NHL Central Scouting’s final rankings.

There’s no denying that Francesco is doing his part to keep his family’s rich tradition in hockey alive.

8:35
Sherbrooke Phoenix Blainville-Boisbriand Armada
Sherbrooke advances to the next round! Phœnix 7 Armada 5
19 hours ago