NHL Prospects Meet The Future NHL Draft
by
Will MacLaren 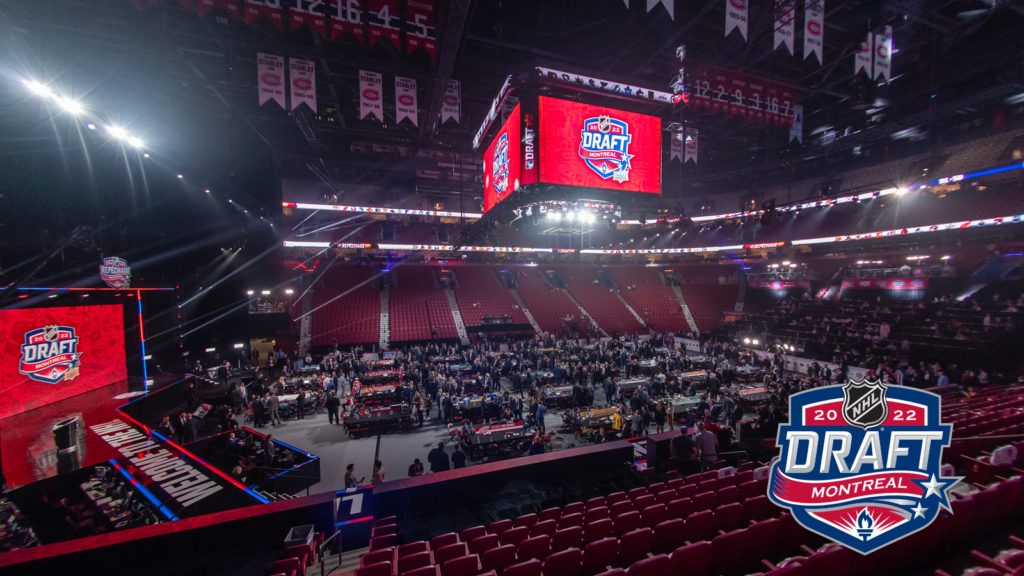 Day 2 of the 2022 NHL Entry Draft, held on Friday at Montreal’s Bell Centre, was another success story for the QMJHL.

Overall, 19 players who suited up in the league last season, including first-rounders Nathan Gaucher and Maveric Lamoureux, heard their names called by various clubs.

Here’s a glimpse of the stars of the show from the second day of activities.

The first “Q” player to be called upon was Gatineau Olympiques defenseman Noah Warren, who came off the board in the second round, 42nd overall, by the Anaheim Ducks. Warren, who was taken eighth overall by the Olympiques in 2020, recorded 24 points in 62 games while using his 6’5”, 214-pound frame to slide into a shutdown role in Gatineau.

Noah Warren has been drafted! The @OlympiquesGAT blueliner will be joining the @AnaheimDucks after being taken with the 42nd pick!#MeetTheFuture | @KubotaCanadaLtd pic.twitter.com/edMeLT9XA6

The Ducks were back on the board in search of additional Olympiques defensemen 11 picks later. They found their man in Tristan Luneau. The product of Victoriaville has become a go to guy on the Gatineau blue line after being selected first overall in the 2020 QMJHL Entry Draft. A two-time Scholastic Player of the Month, Luneau posted 43 points in 63 regular season games in 2021-22.

Yet another Olympiques skater was selected in round three when the Chicago Blackhawks chose Samuel Savoie 81st overall. Another first-rounder from the 2020 QMJHL Draft, Savoie, who hails from Moncton, showed flashes of skill throughout the season, finishing his second campaign in the Q with 33 points in 64 games, including 21 points after the league returned to action in early February.

Another one! @OlympiquesGAT winger Samuel Savoie has been drafted in 3rd round, 81st overall, by the @NHLBlackhawks! #MeetTheFuture | @KubotaCanadaLtd pic.twitter.com/eE0kG04fm4

After selecting Lamoureux last night, the Arizona Coyotes nabbed yet another QMJHL defenseman by taking Cape Breton Eagles blueliner Jeremy Langlois with pick number 94. A third-year blueliner, Langlois had a breakout season with a retooling Eagles squad last season, finishing second on the team with 47 points in 60 games.

Time for Jeremy Langlois to fly out to the desert! The @CBEHockey defenseman has been taken 94th overall by the @ArizonaCoyotes.#MeetTheFuture | @KubotaCanadaLtd pic.twitter.com/idhqUvVgM9

A Nova Scotia rival of Langlois’ would come off the board before round three concluded when the Columbus Blue Jackets made Mooseheads winger Jordan Dumais the 96th choice in the draft. The Ile Bizard, Quebec product rocketed to third in the league scoring race with 109 points in 68 regular season games. That included 37 points in the final 12 games of the campaign.

The wait is over for Jordan Dumais! The @HFXMooseheads top scorer has been selected in the third round of the #NHLDraft by the @BlueJacketsNHL!

In the fourth round, with pick number 116, the Los Angeles Kings went for champion pedigree by selecting Shawinigan Cataractes defenseman Angus Booth. Hampered by injuries early in the season, Booth registered 23 points in 42 regular season games before scoring a pair of key goals for the Cataractes on the march to the club’s first-ever President Cup Championship.

Angus Booth's dream year continues! After being crowned a champion with the @Cataractes_Shaw, the @LAKings have drafted the defenseman with pick 116! @KubotaCanadaLtd | #MeetTheFuture pic.twitter.com/0C2DmouTOi

It was a busy fifth round for the league with seven players selected. The action got underway with the 132rd pick as the Boston Bruins chose Rimouski Oceanic blueliner Frederic Brunet. One of a handful of 2003-born players selected on the day, Brunet turned heads with a breakout season in Rimouski, posting 46 points in 63 games and helping lead the club to a berth in the second round of the playoffs.

Two picks later, another East Division defenseman came off the board when the Buffalo Sabres picked up Vsevolod Komarov from the Quebec Remparts. In his first Q campaign, Komarov was a reliable shutdown man in la vielle capitale. He also managed to post 19 points in 60 regular season games with the 2021-22 Jean-Rougeau Trophy winners.

Vsevolod Komarov sees one of his dreams come true! The @quebec_remparts defenseman has been claimed by the @BuffaloSabres in the 5th round. @KubotaCanadaLtd | #MeetTheFuture pic.twitter.com/KLeumcqq4d

The run on blueliners continued with pick 140 when the San Jose Sharks called out Jake Furlong’s name. The Upper Tantallion, Nova Scotia product led all defensemen on the Halifax Mooseheads in scoring last year with 42 points in 67 games while playing in all situations for the up-and-coming Maritime Division squad.

Jake Furlong is going from coast-to-coast! The @HFXMooseheads blueliner has been drafted 140th overall by the @SanJoseSharks! #MeetTheFuture | @KubotaCanadaLtd pic.twitter.com/BaLAamXI2N

Sometimes age doesn’t matter at the NHL Draft. Just ask 20-year-old winger Patrick Guay, who was chosen by the Vegas Golden Knights with the 145th pick. Guay finished second in the league with 55 goals while suiting up in Charlottetown with another notable Knights prospect, defenseman Lukas Cormier. Guay, who was dealt by the President Cup finalist Islanders last week, is preparing for his overage season with the Blainville-Boisbriand Armada.

The @GoldenKnights land a 55-goal scorer in the 5th round! Congratulations to @IslandersHKY forward Patrick Guay on being drafted 145th! #MeetTheFuture | @KubotaCanadaLtd pic.twitter.com/IcZTD5oYsy

At selection 152, the St. Louis Blues welcomed defenseman Marc-Andre Gaudet into the fold. The Saint-Ignace, New Brunswick blueliner is set to join the Chicoutimi Sagueneens next season after recording 38 points in 68 regular season games and playing in key situations with a talented Acadie-Bathurst Titan squad in 2021-22.

With the very next pick, Sherbrooke Phoenix defenseman David Spacek became the latest member of the Minnesota Wild. A member of this year’s Rookie All-Star team, as well as the winner of the Raymond-Lagace Trophy as Defensive Rookie of the Year, Spacek posted 50 points in 57 regular season games before leading the Phoenix to its first-ever trip to the league semifinals with 13 points in 11 games.

Time for David Spacek to hear his name called! The @PhoenixSherbroo blueliner has been drafted in the 5th round by the @mnwild.@KubotaCanadaLtd | #MeetTheFuture pic.twitter.com/awk8ZpufaM

The fifth round concluded with the New York Rangers pick, who used the 161st overall selection on Moncton Wildcats winger Maxim Barbashev. After posting a point per game in a 10-game cameo in 2020-21, Barbashev, whose older brother Ivan previously starred with Moncton before making his way to the St. Louis Blues, recorded 42 points in 59 games and kept Wildcats fans cheering for more.

The final four selections out of the Q occurred in round seven, starting with Acadie-Bathurst Titan defenseman Miguel Tourigny at pick 216. The 20-year-old from Victoriaville was picked up by the Titan midway through last season after parts of four campaigns with the Armada. By the end of the regular season, Tourigny found himself second in defensive scoring with 80 points in 65 games. He would also be named to the First All-Star Team.

A dream come true for Miguel Tourigny! The @ABTitan defenseman has been drafted by the @CanadiensMTL in the seventh round of the #NHLDraft! @KubotaCanadaLtd | #MeetTheFuture pic.twitter.com/I3EQYphAwz

The 220th selection was used by the Philadelphia Flyers on Blainville-Boisbriand Armada winger Alexis Gendron. A second year forward, the 19-year-old from Salaberry-de-Valleyfield, Quebec registered his first 30-goal season in the QMJHL last year, scoring exactly that amount, as well as adding 16 assists, in 66 games, good for third on the club in scoring. Gendron is set to become a key cog in a rapidly improving Armada squad in 2022-23.

Another #QMJHL defenseman drafted! This time it's Dyllan Gill of the @HuskiesRn who joins the @TBLightning in the seventh round. @KubotaCanadaLtd | #MeetTheFuture pic.twitter.com/BpWcon6CxE

The Draft concluded with the defending Stanley Cup Champion Colorado Avalanche selecting goaltender Ivan Zhigalov 225th overall. The lone QMJHL netminder chosen at this year’s event, Zhigalov posted a fantastic 26-9-1-2 record and a 2.84 goals against average with the Sherbrooke Phoenix. The Belarussian netminder will suit up for the OHL’s Kingston Frontenacs next season after being claimed in the most recent CHL Import Draft.