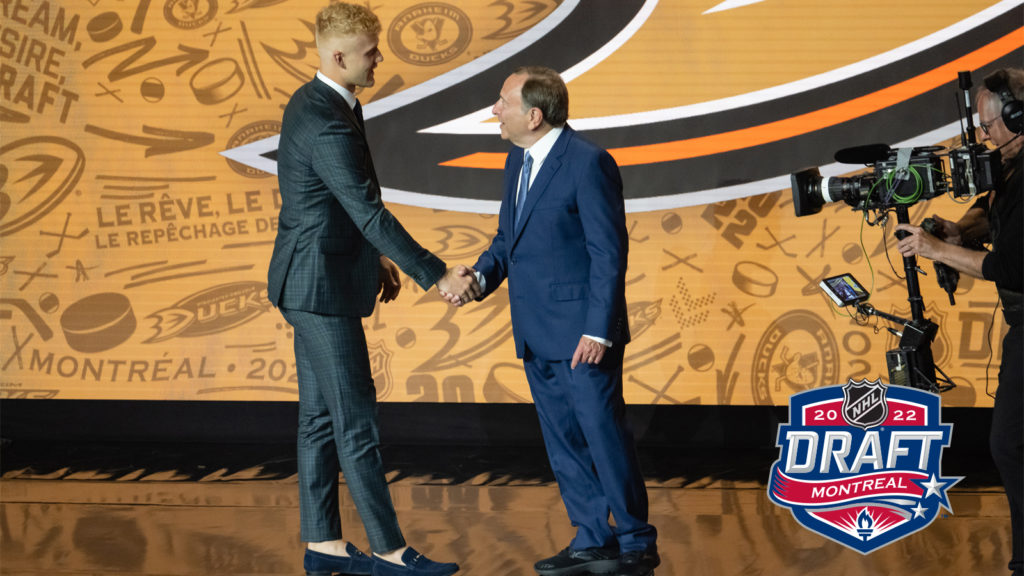 The next generation of potential pro stars crossed the stage at the Bell Centre in Montreal on Thursday evening as the first round of the 2022 NHL Entry Draft was held. Two players from the QMJHL heard their names called among the 32 talents selected.

The Anaheim Ducks stepped to the podium with pick number 22 and chose Quebec Remparts center Nathan Gaucher. Due to his late birthday (November 6), Gaucher has now put three seasons in with the Remparts. Following a 31-goal campaign with the Jean-Rougeau Trophy-winning Quebec squad this past season, Gaucher was presented with the Michael-Bossy Trophy as the league’s top professional prospect. The 18-year-old from Richelieu, Quebec is set to attend Canada’s National Junior Team Camp in Calgary, Alberta later this month.

The Arizona Coyotes used a last second trade to snag the 29th selection and used it to take Drummondville Voltigeurs defenseman Maveric Lamoureux. The Hawkesbury, Ontario product used his 6’7” frame to make an impression on the league in his second season with the Volts. Besides being a notable physical presence, Lamoureux, who was chosen 12th overall by Drummondville at the 2020 QMJHL Entry Draft, registered 24 points in 54 regular season games. He becomes the first Voltigeurs player chosen in round one since Nicolas Beaudin and Joseph Veleno were both selected at the 2018 Draft.

It's @mavelamoureux's turn to hear his name called in the first round! The @VoltigeursDRU defenseman has joined the @ArizonaCoyotes with the 29th pick. 👏#MeetTheFuture | @KubotaCanadaLtd pic.twitter.com/1OjyhcVhj1