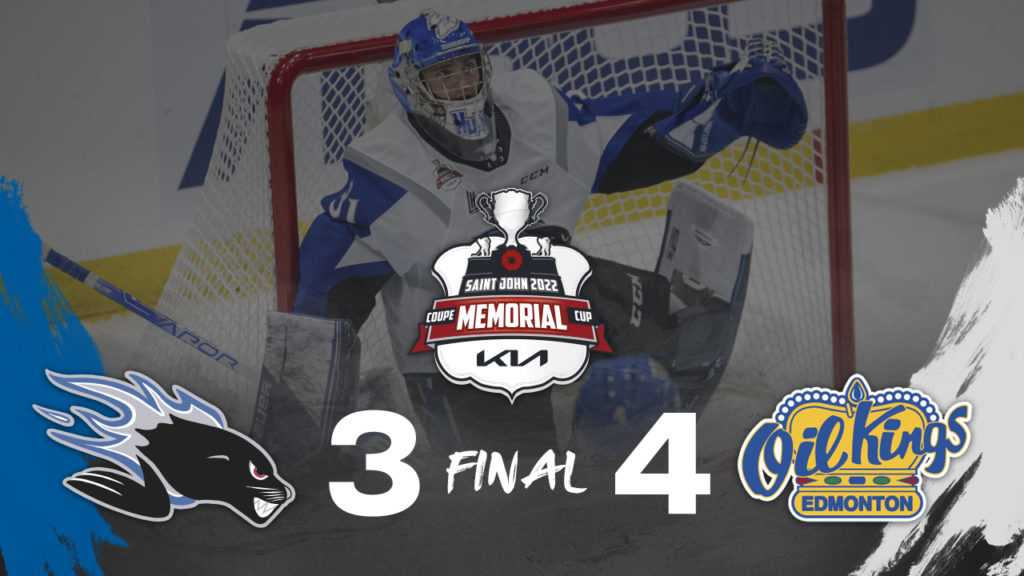 Jaxsen Wiebe’s third goal of the game at the 8:05 mark of overtime was the difference maker as the Edmonton Oil Kings found the win column for the first time at the 2022 Memorial Cup presented by Kia thanks to a 4-3 triumph over the host Sea Dogs on Wednesday night.

The win was the first under the three-on-three overtime format that was adopted prior to the start of this year’s tournament. It was also the first victory for a WHL Champion at the event since the 2015 Memorial Cup Final, which was also an Oil Kings triumph.

Carter Souch scored once and added a pair of assists for the Oil Kings (0-1-0-1), who received a solid 36-save effort from Sebastien Cossa. Sea Dogs markers came off the sticks of Raivis Kristians Ansons, Josh Lawrence and William Dufour. Lawrence and Ansons also added an assist, while Nikolas Hurtubise made 27 saves for Saint John (1-0-1-0).

The first period featured plenty of offense and momentum shifts with the Dogs taking a 3-2 lead into the dressing room. The scoresheet was covered in Oil at first however, as Wiebe wove his way towards the crease, banging in a second effort past Hurtubise to give Edmonton a 1-0 lead at 2:14. The Oil Kings upped the count to 2-0 just over two minutes later when Souch buried a slick cross-ice pass from Josh Williams at the end of an extended two-on-one.

The home team then sprung to life with a pair of goals 25 seconds apart to tie things up at 2-2. First, following up on a play between Lawrence and Vincent Sevigny to work the puck into the slot, Ansons provided the finishing touch, stuffing a shot through the five-hole of Cossa at the 2:01 mark. Then, Lawrence threw a shot towards the net that deflected off an Oil Kings defenseman and past their netminder to draw the Dogs even. They would take the lead at precisely the halfway mark of the period, when Dufour pounced on a turnover at the Edmonton blueline, streaked down the wing and unleashed a powerful wrister over Cossa’s glove. The Sea Dogs held a 16-9 shots advantage through 20 minutes.

The second period was a much calmer affair in terms of offense, the Oil Kings delivering the lone goal. After a fantastic individual effort and a shot in close from Souch, Wiebe was there to collect the rebound and tie things up once more with a powerplay marker at 2:05. Shots in the middle frame were even at eight.

A scoreless third period saw the Sea Dogs outshoot the Oil Kings 10-7 as both teams searched for a way to end the game in regulation. This paved the way for Wiebe’s overtime heroics as he delivered his first career major junior hat trick in fantastic fashion to end a thrilling contest. Edmonton finished the extra frame with a 7-5 edge in shots on goal, with Hurtubise and Cossa stealing the show with some incredible saves.

The OHL Champion Hamilton Bulldogs (0-0-0-1) will be looking for their first tournament victory when they face the President Cup winning Shawinigan Cataractes (1-0-0-0) on Thursday at 6pm ET/7pm AT.