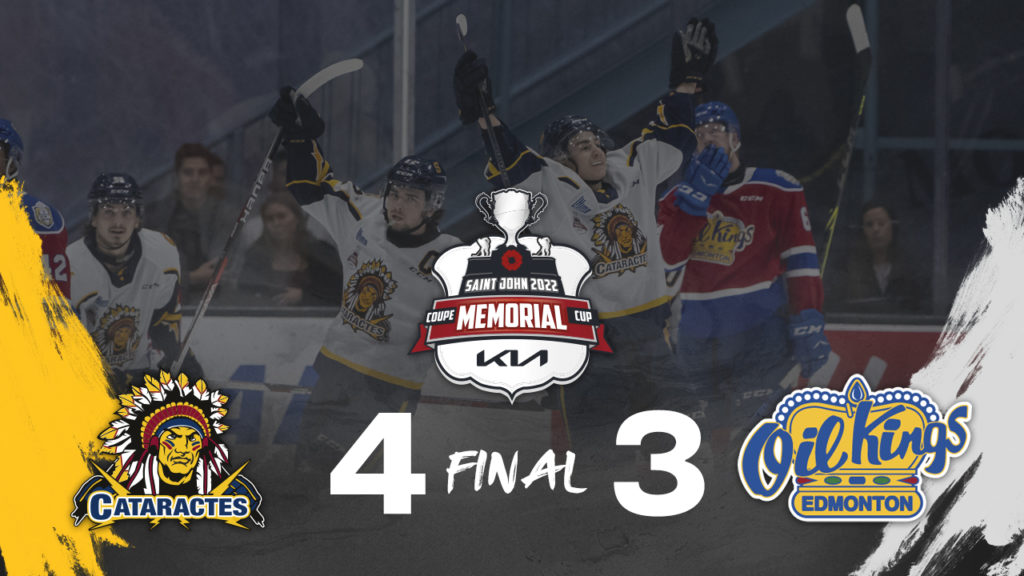 The first night of the 2022 Memorial Cup presented by Kia was all about the host team winning the battle of the Dogs. Tonight, the focus shifted to the comeback Cats.

The Shawinigan Cataractes, authors of five come-from-behind victories in the 2022 President Cup Playoffs, added another one to their collection this evening in Saint John, rallying in the third period to earn a 4-3 victory over the WHL champion Edmonton Oil Kings.

Jordan Tourigny, Xavier Bourgault, Pierrick Dubé and Olivier Nadeau found the back of the net for Shawinigan (1-0-0-0), while captain Mavrik Bourque added a pair of assists. Luke Prokop, with a goal and an assist, led the offense for Edmonton, who also received goals from Tyler Horstmann and Cole Miller.

Goal scoring was the exclusive property of the defensemen in the opening period. While on an extended powerplay, Tourigny was able to walk in from the blueline and unleash a wrister that beat Oil Kings goaltender Sebastian Cossa to open the scoring at the 10:11 mark. Prokop would draw the Oil Kings even with just 44 seconds to play in the frame when his knuckler eluded Cataractes goalie Charles-Antoine Lavallée. Edmonton held a 14-11 edge in shots through 20 minutes.

Though the Cataractes outshot the Oil Kings 9-4 in the second period, it was Edmonton that took its first lead of the contest at the 4:11 mark when Horstmann picked up a stretch pass in mid-stride before beating Lavallée with a high wrist shot. Shawinigan would create a 2-2 tie exactly three minutes later as Zachary Massicotte pounced on a loose puck deep in the offensive zone before centering a pass to Bourgault, who made no mistake on a one-time shot that beat Cossa over the shoulder. Edmonton would again stretch out the neutral zone to retake the lead at 17:03, with Miller finishing off a passing play involving Jalen Luypen and Simon Kubicek.

The Cataractes would cue the comeback in period three. First, the QMJHL Champions would tie things up at the 5:37 mark of the third when Dubé’s seeing eye shot from the blue line found its way past a screened Cossa. Just 1:18 later, Bourque, on a tremendous individual effort, threw a one-hand pass in front to Nadeau who made no mistake in burying the eventual game-winner. The Cataractes held a 15-10 advantage in shots in the final frame, meaning that Lavallée stopped 32 pucks in the win while Cossa kicked aside 24 shots in the loss.

Day 3 at the 2022 Memorial Cup presented by Kia sees the Oil Kings right back at it as they face the host Saint John Sea Dogs at 6pm ET/7pm AT.