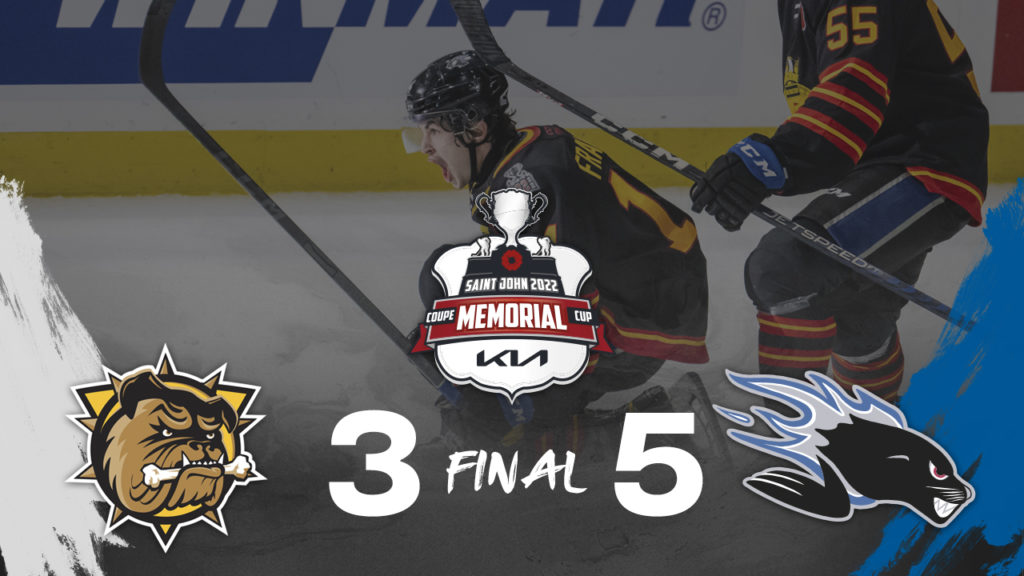 The Saint John Sea Dogs had been idle for 39 days. They looked anything but stale on Monday night though, capturing the opening game of the 2022 Memorial Cup Presented by Kia on home ice, outlasting the OHL’s Hamilton Bulldogs 5-3 before a raucous crowd.

Ryan Francis, with a pair, Yan Kuznetsov, William Dufour, and Peter Reynolds all found the back of the net for the Sea Dogs (1-0-0-0), who outshot Hamilton 36-20 on the evening, while Philippe Daoust and Raivis Kristians Ansons chipped in with three assists each.

The Sea Dogs showed no signs of rust and got the hometown fans out of their seats early as Kuznetsov’s shot from inside the blue line found its way between the wickets of Bulldogs netminder Marco Costantini just 2:17 into the opening frame. The Bulldogs would respond at the 8:43 mark, when Winterton buried a centering feed from Morrison five-hole on Sea Dogs goaltender Nikolas Hurtubise while on the powerplay to make it a 1-1 game. The hosts would recapture the lead with just under three and a half minutes remaining in the period as Francis saw Ansons’ shot go off his stick and into the back of the net on a scramble at the lip of the crease. Saint John held a 13-8 advantage in shots on goal after 20 minutes.

The Sea Dogs poured it on in the middle period, scoring three times and outshooting Hamilton 18-6 in the process. They increased their lead to 3-1 at 10:50 when Dufour, the QMJHL’s regular season MVP and top goal scorer, crashed the net and roofed a puck over Costantini, who had been forced deep into his net after defending a rush by Daoust and Jérémie Poirier. Francis upped the Sea Dogs’ advantage to 4-1 with 1:27 left in the stanza by first collecting the puck off the draw, then swooping behind the net and tucking home a beautiful wraparound goal.

The Bulldogs responded in the third period when Hayes provided a perfect redirect on a centering attempt by Morrison on the powerplay at 10:06. Hamilton would pull within one at the 16:41 mark, Winterton converting on yet another centering pass from Morrison after gaining possession from an offensive zone draw to make it a 4-3 game. Reynolds would eventually seal the deal with his empty netter scored at 18:48. Hamilton held a 6-5 shots edge in the final frame, meaning that Costantini stopped 31 shots in the loss while Hurtubise made 17 saves for the win.

Day 2 of the 2022 Memorial Cup Presented by Kia features the debuts of the QMJHL Champion Shawinigan Cataractes and WHL title holders, the Edmonton Oil Kings. Game time is set for 6pm ET/7pm AT.