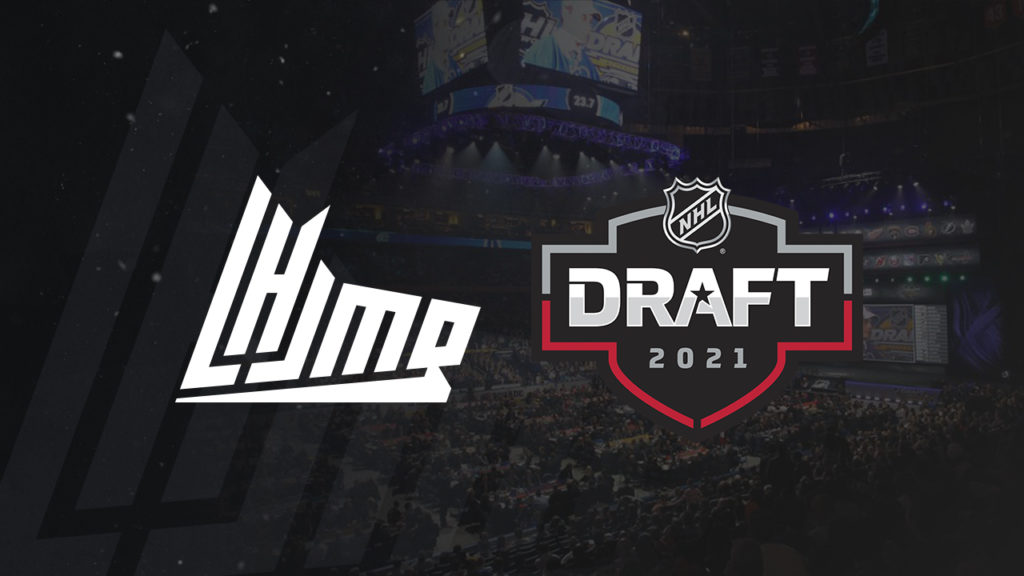 Just like it was the case for the Quebec Major Junior Hockey League’s selection process held last month, the NHL Entry Draft is being held virtually because of Covid-19 restrictions.

With 44 players ranked on the NHL Central Scouting list and many more prospects to choose from, it should be yet another interesting draft the QMJHL and its representatives. Last year, five players from the Q were selected in the opening round, including first overall pick Alexis Lafrenière, while another 14 were chosen in the ensuing rounds.

Everything you need to know about the QMJHLers at the 2021 NHL Draft can be found here on our Live Blog or on our @QMJHL Twitter feed.

The St. Louis Blues have used the 17th selection of the opening round to pick up Rimouski Oceanic forward Zachary Bolduc. The 18-year-old forward from Trois-Rivières was ranked 17th among North American skaters on the NHL Central Scouting list. One year after seeing Alexis Lafrenière get claimed with the first overall pick, Rimouski has once again seen one of its players become the first QMJHL representative off the board.

Here we go! The @StLouisBlues select @zacharybolduc12 of the @oceanicrimouski with the 17th pick of the first round! #NHLDraft | #MeetTheFuturepic.twitter.com/168vUUxI9Q

The Edmonton Oilers added another creative player to their core by drafting Shawinigan Cataractes star forward Xavier Bourgault. Coming in at the 13th spot among North American skaters, the L’Islet, Quebec native was the highest ranked QMJHL prospect entering the draft. Bourgault follows teammate Mavrik Bourque (Dallas, 2020 – 1/30) as the latest Shawinigan product selected in the opening round of the NHL Entry Draft.

With the 22nd-overall pick, the #Oilers select forward Xavier Bourgault from the Shawinigan Cataractes of the @QMJHL.#NHLDraft | #LetsGoOilers pic.twitter.com/zb27shGe6m

Forward Xavier Bourgault of the @Cataractes_Shaw has been drafted by the @EdmontonOilers with the 22nd pick! #NHLDraft | #MeetTheFuturepic.twitter.com/s55gsEfC6V

The Nashville Predators used their second pick of the first round to grab Halifax power forward Zachary L’Heureux. The Chateauguay, Quebec native became the latest Mooseheads player selected in the opening round of the draft following in the footsteps of teammate Justin Barron (Colorado, 2020 – 1/25).

With the 27th overall pick, the #Preds are proud to select Zachary L’Heureux! pic.twitter.com/qdp8kICOVt

A true game-changer, Gatineau Olympiques forward Zachary Dean has been selected by the Vegas Golden Knights with the 30th pick of the opening round. The centerman is the first Olympiques player selected in the first round of the NHL Draft since Emile Poirier (Calgary, 2013 – 1/22). He is the latest Q draft pick Vegas has made, following the franchise’s selection of Lukas Cormier (Vegas, 2020 – 3/68) last year.

With the 30th pick in the 2021 NHL Draft, we have selected forward Zach Dean!!!! #VegasBornpic.twitter.com/hYw45ETR4M

The first QMJHL defenseman selected in the 2021 NHL Entry Draft, Evan Nause of the Quebec Remparts was drafted with the 56th pick by the Florida Panthers. One of the most well-rounded blueliners in the QMJHL, Nause earned a spot on the 2020-21 QMJHL Rookie All-Star Team after picking up 22 points in his first 32 games with the Remparts.

Welcome to the Cats, Evan!

The first QMJHL defenseman is off the board! The @FlaPanthers have used pick #56 to select Evan Nause of the @quebec_remparts.#NHLDraft | #MeetTheFuturepic.twitter.com/2RIpuf4J1N

A tremendous playmaker with great vision, Acadie-Bathurst Titan centreman Riley Kidney was selected by the Montreal Canadiens at the end of the second round with the 63rd pick. The Halifax native racked up 38 points in 33 games this past regular season before leading the Titan with another 17 points in 9 playoff outings.

Congratulations to @kidney_riley on being selected in the 2nd round, 63rd overall by the Montreal Canadiens!

We have traded a 2022 third round pick to Montreal in order to move up to select Tyson Hinds from @oceanicrimouski of the @QMJHL! #DucksDraft presented by @Honda pic.twitter.com/fSkosmfRyV

The @AnaheimDucks have used the 76th pick to get their hands on @oceanicrimouski d-man Tyson Hinds! #NHLDraft | #MeetTheFuture pic.twitter.com/pjuaQ0kmLP

.@ABTitan centreman Cole Huckins is taken with the 77th pick by the @NHLFlames! #NHLDraft | #MeetTheFuturepic.twitter.com/6HDUKvbwya

With Pick 8⃣9⃣, we have selected defenceman Cameron Whynot!

The @NHLFlames add another QMJHL weapon by drafting Cameron Whynot of the @HFXMooseheads with the 89th pick!

.@Cataractes_Shaw forward Olivier Nadeau has been selected by the @BuffaloSabres with the first pick of the fourth round, 97th overall.#NHLDraft | #MeetTheFuture pic.twitter.com/ZShEPDqHOZ

Congratulations to William Trudeau on being selected in the 4th round by @CanadiensMTL. #NHLDraft2021 pic.twitter.com/RFckVxF0Ug

Congratulations to @JacobMelanson6 on being selected in the 5th round, 131st overall by the Seattle Kraken!

With the 131st overall pick in the 2021 #NHLDraft, the #SeaKraken select @jacobmelanson6 from Acadie-Bathurst Titan of the QMJHL! pic.twitter.com/MVvzWh6IdG

With the 133rd pick in the 2021 #NHLDraft, we’ve selected James Malatesta.

Did… did we just draft Bobby Orr?

Bobby Orr is taking his talents to Carolina! The #Canes made him the 136th overall pick today in the #NHLDraft. Congrats Bobby! @bobbyorrjr88 #GoMooseGo pic.twitter.com/2yyQx3hcOL

At 139th overall, we welcome Manix Landry to AZ! 🌵 pic.twitter.com/nDALNCzvWe

You will LOVE this guy @Canes! #LetsGoCanes pic.twitter.com/0afAlXACpB

Welcome to the #Canes, Justin!

.@PhoenixSherbroo forward Joshua Roy must be jumping for joy after being drafted by the @CanadiensMTL with the 150th pick! #NHLDraft | #MeetTheFuture pic.twitter.com/O357ZlHhOa

With the 154th pick in the 2021 #NHLDraft, the Penguins select defenseman Isaac Belliveau. pic.twitter.com/DTvwvrqcEA

Oscar is heading to Hockeytown!

Congratulations to Oscar Plandowski on being selected by the @DetroitRedWings #NHLDraft2021 pic.twitter.com/uWQbopnS2X

With the 155th pick in the 2021 #NHLDraft, the #RedWings select defenseman Oscar Plandowski.#DRWDraft x #LGRW pic.twitter.com/qIIOtibEV3

Another Sea Dog will be joining the back-to-back Stanley Cup Champions! Congrats Cam MacDonald on being drafted 160th overall to the @TBLightning! #NHLDraft pic.twitter.com/rnzIQBsoQn

Coming in at No. 160 is Cameron MacDonald from the @SJSeaDogs of the @QMJHL!

From the Charlottetown Islanders of the QMJHL, the #CBJ are proud to select @benjboyd15 with the 165th pick in the 2021 #NHLDraft. @mhl | #CBJ pic.twitter.com/ipeZV3WeeH

They will love this guy in Columbus 💥

Congratulations to Ben Boyd on being selected by the @BlueJacketsNHL #NHLDraft2021 pic.twitter.com/WTDoApaH4f

Congratulations to Xavier Simoneau on being selected by @CanadiensMTL #NHLDraft2021 pic.twitter.com/5HjPiIQiwF