QMJHL Hall of Fame
by
LHJMQ/QMJHL 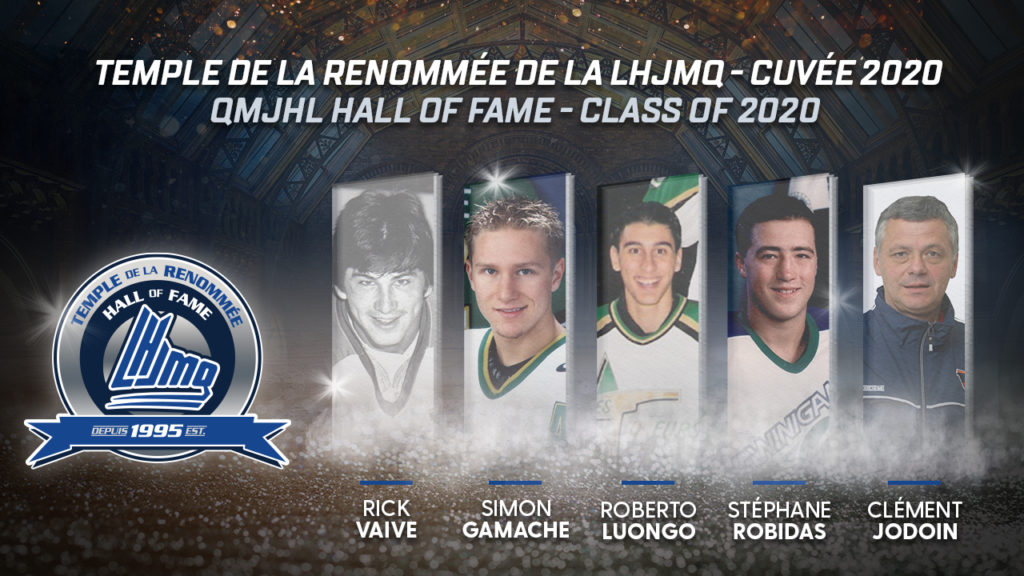 The Quebec Major Junior Hockey League is proud to present its class of 2020 that will be inducted into the QMJHL Hall of Fame on April 8, 2020 in Brossard, QC.

Once again, you will find many personalities who have left their mark like few others have this year. Here is a look at this year’s class, followed by a brief overview of each player’s career;

In 241 games with the Val-d’Or Foreurs, including the playoffs, he recorded 180 goals, while setting franchise records of 269 assists and 449 points.

During the 1999-2000 season, the Foreurs were in the midst of an important rebuild following their 1998 President Cup win. The 18-year-old Gamache registered 143 points, 89 more than the team’s second leading scorer, Eric Fortier. The following season, Gamache collected 74 goals and 184 points in 72 games. Since that outstanding campaign, no QMJHL player has surpassed 180 points or 72 goals in a single regular season.

For Simon Gamache, his signature game was undoubtedly his last one played in Val-d’Or, which was held on May 4, 2001. That evening, with a performance of three goals and two assists, his fifth point of the game eclipsed the prestigious 52-point playoff record set by the legendary Mario Lemieux in the spring of 1984, 17 years earlier.

After leading the Foreurs to their second President Cup thanks to a 57-point output that included 22 goals, the Guy Lafleur trophy was awarded to the new record holder as the most valuable player in the playoffs. He and his teammates would go on to compete hard in the Memorial Cup tournament, losing 6-5 in overtime in the final against Red Deer. Gamache finished first in the tournament’s scoring race with seven points.

His #22 was retired by the Val-d’Or Foreurs organization in 2017. Simon Gamache will enter the QMJHL Hall of Fame as a player on April 8th, 2020.

An individual who always embraced a challenge, he would take the reigns of the QMJHL’s expansion Halifax Mooseheads in 1994. For three seasons he would hold the duel role of Head Coach and General Manager. He built a solid foundation in Halifax and the Mooseheads would reach the seventh game of the semi-finals in the spring of 1997.

In 2004, he would begin his second stint in the QMJHL as head coach of the Lewiston MAINEiacs. The 2006-07 season would be marked by a regular season championship and a President Cup championship. Jodoin would earn the Ron-Lapointe Trophy as the league’s top bench boss – the second time that his name would be engraved on the prestigious award.

In 2007-08, he would begin coaching his third QMJHL team, the Rimouski Océanic.

Over 10 seasons in the QMJHL, he would work 762 games, including 101 in the playoffs. To this day, his 336 regular season victories (16th all-time) and 54 playoff wins (9th all-time) place him amongst the upper echelons of QMJHL coaches.

As an assistant coach with Canada’s World Junior team, he would capture three consecutive gold medals from 2006 to 2008. Clément Jodoin will enter the QMJHL Hall of Fame as a builder on April 8th, 2020.

At 16 years of age, Luongo was selected with the second overall selection in the 1995 QMJHL Entry Draft by the Val-d’Or Foreurs. He would take part in 23 of the team’s 70 games during his rookie year.

In 1996-97, he was awarded the Michael Bossy Trophy as the QMJHL’s top professional prospect. In the 1997 NHL Entry Draft, the 6’03” goaltender would be chosen fourth overall by the New York Islanders.

Amongst some of his junior career highlights are certainly the seven shutouts he recorded during the 1997-98 regular season, tying record-holder Nick Sanza. He would hold the record for most career victories in the playoffs with 38 for sixteen years, from 1999 to 2015.

His #1 jersey was retired by both the Foreurs and the Titan. Roberto Luongo will enter the QMJHL Hall of Fame as a player on April 8th, 2020.

At 16 years of age, Robidas joined his new team, not knowing that he would one day become its captain, let alone assume that his #19 jersey would be retired by the Cataractes some 18 years later. He also had no idea that he would become a seventh-round pick of the Montreal Canadiens in 1995.

He still holds several Shawinigan franchise records for a defenceman, but the most prestigious one is his 245 career points in the regular season. On five occasions, he matched his personal best by registering four-point games.

In addition, since 2012, he has been one of the co-owners of the Sherbrooke Phoenix franchise. Stéphane Robidas will enter the QMJHL Hall of Fame as a player on April 8th, 2020.

As soon as he stepped onto the ice during the 1976-77 season, Vaive terrorized opposing goaltenders. His franchise rookie records of 51 goals and 110 points have yet to be threatened. As such, his achievements would earn him the QMJHL Rookie of the Year Award. In addition, with 23 points in 18 games in the playoffs, he proved to be an important player in the Castors’ President Cup title win in the spring of 1977.

With 155 points registered during the 1977-78 regular season, Vaive was counting on two exceptional teammates in Sylvain Locas and Ron Carter, who scored 80 and 88 goals respectively, while Vaive lit the lamp on 76 occasions himself. Nine of his goals were scored shorthanded, a franchise record that still stands today.

He was invited to join Canada’s junior squad for the World Championship in 1978. The Canadians returned from that tournament with a bronze medal.

During his QMJHL career, including the playoffs, Vaive had totals of 145 goals and 155 assists, good for 300 points in 164 games played. His high intensity play also earned him 408 penalty minutes.

Rick Vaive will enter the QMJHL Hall of Fame as a player on April 8th, 2020.