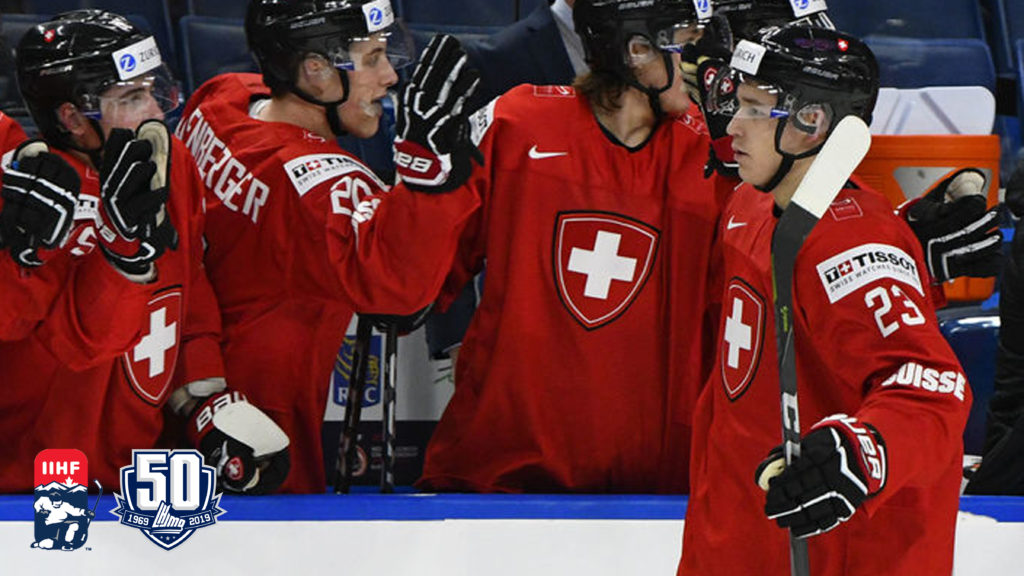 The recently completed 2019 IIHF World Junior Hockey Championship in Vancouver and Victoria, BC featured some of the top young talent in the game today. As usual, the QMJHL was represented on several participating squads, with numerous players proudly putting forth impressive performances for their respective nations.

Our Home and Native Land

Any player that has earned the opportunity to represent their country at the World Juniors will no doubt describe the honor that comes with the accomplishment. To do so as members of the host nation enhances that feeling immeasurably. Five QMJHL representatives experienced just that situation over the holidays. Although the outcome was not what they or the hometown crowd desired – Canada finished 6th in the tournament – they nonetheless kept the fans on the edge of their seats with the high calibre of hockey they brought to the event.

Leading the way for Team Canada was its captain, Drummondville Voltigeurs forward Maxime Comtois. In five games, the Anaheim Ducks prospect scored five times, added an assist and was a +5 for the tournament. In a 14-0 victory over Denmark in the tournament opener, Comtois scored four times in the contest to tie the Canadian World Juniors record. Just the seventh player ever from the QMJHL to wear the “C” for Canada at the event, Comtois was also named one of the top three players for the host nation at the tournament.

Comtois’ Drummondville teammate Joseph Veleno also donned the maple leaf in Vancouver. A first round selection of the Detroit Red Wings in the 2018 NHL Entry Draft, Veleno chipped in with a pair of assists in five games and was a +2. He now returns to the Central Division leading Voltigeurs, where he sits atop the leaderboard in team scoring.

Veleno wasn’t the only Red Wings prospect from the “Q” to take the ice for Team Canada. Halifax Mooseheads’ defenseman Jared McIsaac registered an assist and was a +4 in four games during the event. For the Detroit second rounder, this marks the first of two high profile events the Truro, NS native will partake in this year as McIsaac’s focus now shifts back to the Mooseheads, the 2019 Memorial Cup host team.

One player from Team Canada is looking to make his second Memorial Cup appearance in a row. Defenseman Noah Dobson proved to be an integral part of Team Canada’s blueline corps, logging several key minutes while also scoring once in four games to go with a +4 rating. No stranger to big games, Dobson played a key role in the Acadie-Bathurst Titan’s march to the 2018 Memorial Cup. The New York Islanders’ first round selection in the 2018 NHL Entry Draft now hopes to make his way back to the tournament following a recent trade to the league leading Rouyn-Noranda Huskies.

Finally, the youngest member of Team Canada – and the ninth youngest participant of all time for the nation – also hailed from the “Q”. A 17-year-old winger of the Rimouski Oceanic, Alexis Lafreniere fired home a key goal during Canada’s 5-1 victory over the Czech Republic in the preliminary round. One of the league’s top scorers and a top prospect for the 2020 NHL Entry Draft, Lafreniere was also a +3 in five tournament games.

As is typically the case at an event such as the World Juniors, the home fans tend to establish a following for other participants, in addition to their own team. One of those squads this year was Team Switzerland. Led by colorful Head Coach Christian Wohlwend, the Swiss shocked Team Sweden in the Quarter-Finals before eventually falling to the Russians in the bronze medal game.

The star of the show for the Swiss was center Philipp Kurashev. Averaging well over a point-per-game with the Quebec Remparts this season, Kurashev showed the rest of the world what he’s capable of by leading the tournament in goals with six. His seven points in seven games placed him in a tie for seventh in tournament scoring. A fourth-round selection of the Chicago Blackhawks in the 2018 NHL Entry Draft, Kurashev was named not only one of Switzerland’s top three players for the event, but also earned a place on the tournament All-Star team.

Shawinigan Cataractes rookie center Valentin Nussbaumer also suited up for the Swiss, scoring twice and adding an assist in seven games. The second of Nussbaumer’s tallies came during the tournament’s bronze medal game versus Team Russia.

On the back end, Simon LeCoultre proved to be a jack of all trades for Team Switzerland. In seven games, the third-year Moncton Wildcats veteran scored once and added an assist while seeing the ice in all situations.

Also seeing duty on the blueline for the Swiss was David Aebischer. Currently in his first season with the Gatineau Olympiques, Aebischer recorded an assist in seven games with his national team.

Team Czech Republic finished seventh at the 2019 World Juniors. They were represented in part by two QMJHL players.

Jakub Lauko is quickly making a name for himself in the “Q” as a dynamic, point-per-game center with the Rouyn-Noranda Huskies. He parlayed that success into a strong showing with the Czechs, scoring once and adding an assist in five games. A third-round selection of the Boston Bruins in the 2018 NHL Entry Draft, Lauko was named the QMJHL’s Rookie of the Month back in November.

A Memorial Cup Champion with the 2018 Acadie-Bathurst Titan, defenseman Michael Ivan parlayed that experience into a commendable performance with Team Slovakia at the 2019 World Juniors. In five games, Ivan scored once and added three assists. His versatility did not go unnoticed. Following the event, Ivan found himself on the move, having been dealt to the Drummondville Voltigeurs.

All in all, over the course of eleven days on Canada’s West Coast, countless people were introduced to some of the best up and coming talent in the hockey world today. As it has typically been the case, those that made their way from the QMJHL found themselves front and center in several of the tournament’s key moments.