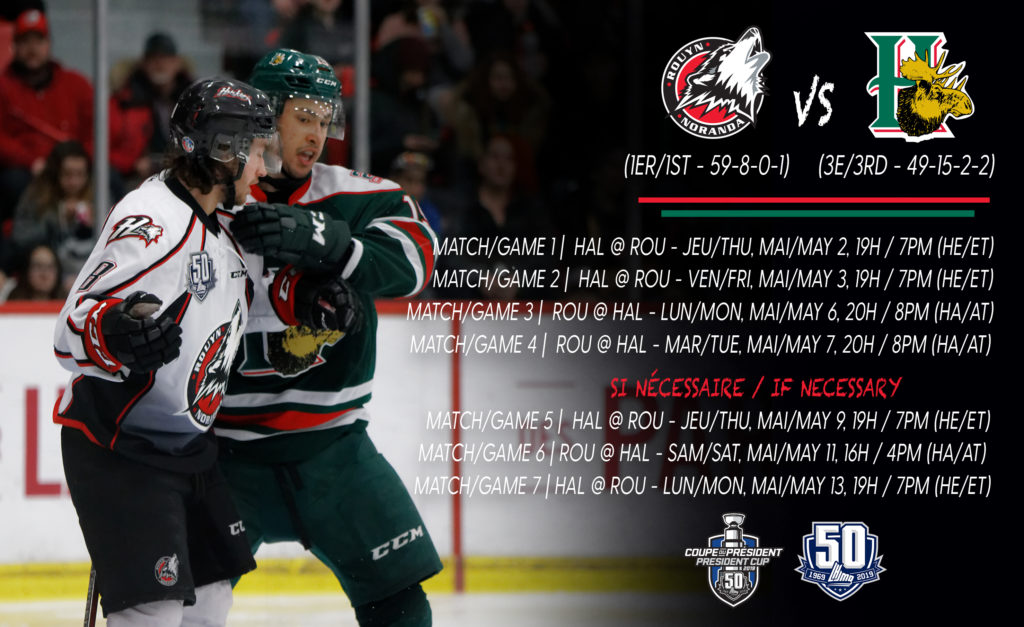 It’s a Memorial Cup preview in the making as the host Halifax Mooseheads travel to Rouyn-Noranda to take on the Huskies in the 2019 Rogers President Cup Final. The series opens up on Thursday night at the Iamgold Arena.

The Huskies’ playoff run has mirrored their regular season; as it has progressed, the club has gotten stronger and stronger. Since dropping Game 4 of its first round series to the Shawinigan Cataractes, Mario Pouliot’s troops, who captured a league-record 59 victories during the regular season, have reeled off ten straight wins, defeating first the Cataractes in six games, then the Victoriaville Tigres and Rimouski Oceanic in back-to-back four game sweeps to reach the championship round. This is the third trip to the President Cup Final for the Huskies, who were swept by the Gatineau Olympiques in 2008 before claiming their first title with a five-game series victory over Shawinigan in 2016.

The Mooseheads, after claiming the Maritimes Division crown during the regular season, faced their own adversities early on in the postseason. Dropping the first two contests of its first-round battle with the Quebec Remparts, the club rallied to capture the series in seven games. Since then, Éric Veilleux’s troops have swept the Moncton Wildcats in the league’s Quarter-Final, before taking down the Drummondville Voltigeurs in six games to punch their ticket to the President Cup Final for the fourth time in franchise history. In previous appearances, the Moose fell first to the Hull Olympiques in seven games in 2003, then to the Rimouski Oceanic in a four-game sweep back in 2005. The organization would claim its first President Cup in 2013 by eliminating the Baie-Comeau Drakkar in five games. As hosts of the upcoming Memorial Cup tournament, the Mooseheads’ trip to the final ensures that the Huskies will also appear in the competition, regardless of who takes home the league’s playoff crown.

This is the fourth time the two franchises have clashed in postseason action. In 2005, the Mooseheads outscored the Huskies 21-6, en route to a four-game sweep in the league Semi-Finals. Halifax would again engineer a four-game Semi-Final sweep over the squad from the Abitibi in 2013. The Huskies would earn a measure of revenge in 2017, vanquishing the Moose in six games during the first round of the playoffs.

The Huskies swept the Mooseheads 2-0 in the season series, coming from behind on both occasions to secure the victory. On January 13th, the visiting Huskies rallied from deficits of 2-0 and 3-1 to defeat the Mooseheads by a score of 5-4. Joël Teasdale, recently acquired from the Blainville-Boisbriand Armada at the time, scored once and added an assist for the Huskies, while Jakub Lauko provided the game-winning tally with under six minutes to go in the third. Keith Getson scored once and added an assist for the Mooseheads.

On March 2nd in Rouyn-Noranda, the Mooseheads pulled ahead 3-1 thanks to a pair of markers from Samuel Asselin before the Huskies cued the comeback, outscoring the visiting side 7-1 the rest of the way – including two goals each from Noah Dobson and Alex Beaucage – to earn an 8-4 victory, the club’s 24th in a row at the time.

The Huskies were dealt a blow entering the league Semi-Finals with the news that Peter Abbandonato, the top scorer in the “Q” during the regular season as well as through the first two rounds of the playoffs, would be lost indefinitely due to mononucleosis. That didn’t stop the squad from producing 20 goals in its four-game defeat of Rimouski, led in large part thanks to Teasdale, who now leads the club with 26 points. Also, among the league leaders offensively are Abbandonato (21 points in 10 games) and Félix Bibeau (20 points). Noah Dobson (20 points) and Justin Bergeron (14 points) sit first and third, respectively, in playoff scoring among defensemen, while Samuel Harvey continues to hold down top spot among all netminders in GAA (1.67), save percentage (.928%) and shutouts (three) during postseason play.

As the playoffs have progressed, two players in particular have emerged for the Mooseheads. One is the current playoff scoring leader, winger Raphaël Lavoie, who has racked up 27 points, including 17 goals. Second on the team’s scoring list is Antoine Morand, with 15 points. From the backend, the offense is spread evenly among the top three of Jake Ryczek (11 points), Jared McIssac and Justin Barron (10 points apiece). The other driving force for the squad during these playoffs, particularly throughout the past two rounds, has been goaltender Alexis Gravel. After struggling during his club’s opening series against the Remparts, the third-year veteran has emerged with the fifth-best GAA (2.52) and third-best save percentage (.921%), while also being named the first star of the game in each of the last three Moose victories.

This marks the second time in a row and sixth occasion since its first occurrence in 1988 that a host team from the QMJHL has also qualified for the President Cup Final. This series also features two of the last three QMJHL franchises to appear in the Memorial Cup Final. The Huskies made it all the way to the last game of the CHL season in 2016 before falling in overtime to the OHL’s London Knights, while the Mooseheads were crowned the top Canadian junior hockey team in 2013, defeating the WHL’s Portland Winterhawks in the final. In Pouliot and Veilleux, this marks the first time since 2006 (Moncton’s Ted Nolan VS. Quebec’s Patrick Roy) that two coaches have faced off in the President Cup Final in their first season behind the benches of their respective clubs.

Several people on either side are making their second consecutive appearance in the President Cup Final. Mooseheads centers Asselin and Morand, as well as Huskies blueliner Dobson and Head Coach Pouliot all captured both the 2018 President and Memorial Cups last season as members of the Acadie-Bathurst Titan.

For Huskies winger Teasdale, he is hoping the third time is the charm after falling short in the championship round in both 2017 and 2018 with the Blainville-Boisbriand Armada. As well, three members of the Huskies 2016 championship squad, center Abbandonato, defenseman Jacob Neveu and goaltender Harvey, will be looking to capture their second title with Rouyn-Noranda.

The Huskies and Mooseheads are separated by nearly 1800 kilometers geographically. But when it comes to earning league, and perhaps even national, supremacy, it could very well come down to a game of inches.