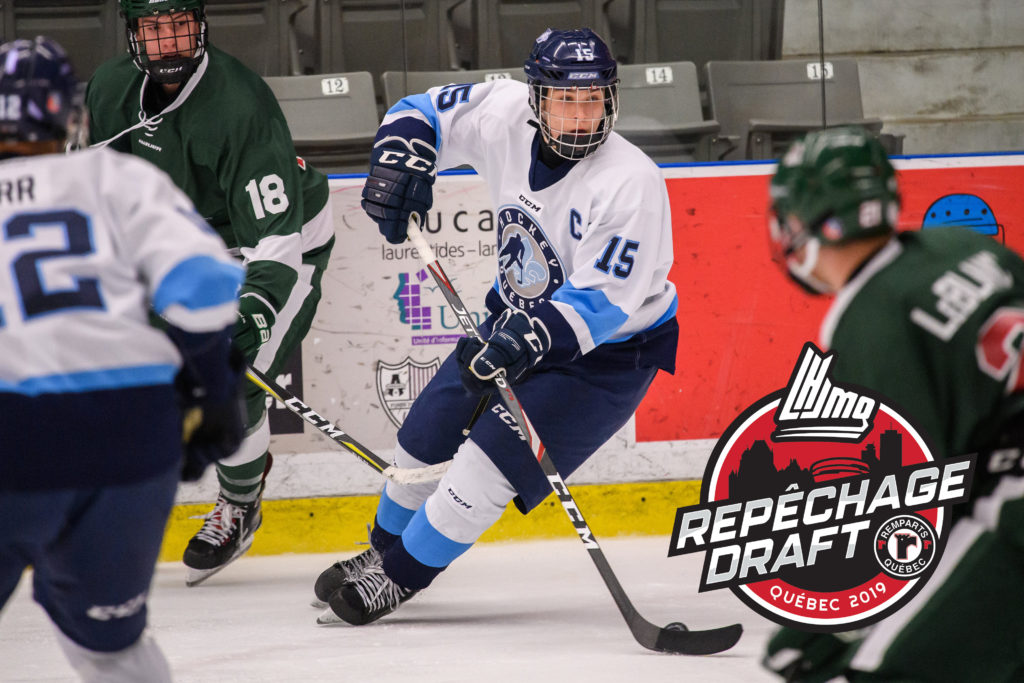 A forward from the Levis Chevaliers sits atop the list of available players leading up to the 2019 QMJHL Draft. Joshua Roy, the Quebec Midget AAA regular season scoring leader, also has the body to back up his production. At only age 15, he’s already 6 feet tall and tips the scale at almost 200 lbs. Scouts all agree that he is one of the best playmakers in his age group on the strength of his excellent vision out on the ice.

Precious are those aged 15 who can boast such developed offensive skills. Joshua just has a knack to find an open teammate, no matter where they are in the offensive zone.

But what scares opposing goalies most is his precise shot that paved the way to 38 goals in 42 games. He also added 50 assists for an impressive 88-point total on the season. Roy was named both the MVP and the Top 15-year old Prospect at the Quebec Midget AAA’s recent Gala of Champions.

The Chevaliers sure will be well represented on Saturday. At the seventh rank on the list of top prospects is Roy’s teammate, Olivier Nadeau. Scouts love his combativeness and passion. He’s a power forward with the ability to score and he makes his teammates better on every shift.

At 6-foot-1 and 200 lbs, Nadeau is tough to move off the puck along the boards. His physical play opens up the ice for his linemates. You liked Cam Neely as a player? If so, then you will certainly love seeing Nadeau play. His leadership also didn’t go unnoticed in the Levis region, on top of racking up 52 points in 31 games before adding 13 more in 11 playoff games.

A third member of the Chevaliers should also hear his name called in the opening round of the draft. Defenceman Olivier Boutin turns heads with his versatility. His skating is fluid and efficient. He is tough to beat one-on-one and his compete level is high.

He may stand 5-foot-9 and weigh a mere 160 lbs, but that has never stopped him. Boutin was chosen on the Quebec Midget AAA’s First all-star team. The talented defenceman also excels in the classroom, culminating in his winning of the Daniel Briere Trophy and $1000 in bursary money at the Midget AAA’s latest Gala of Champions.

Hard work paying off for Bedard

There aren’t many players ready to endure the chippy and physical nature of time spent in the slot. But Anthony Bedard of the Trois-Rivières Estacades is one player who is never afraid to plant his two feet in the crease. Deflections and rebounds in front of the net are how he scored the lion’s share of his 23 goals last season.

His forechecking is relentless and the way he wins puck battles is impressive to scouts. Those were the building blocks of his improbable ascent to the Team Quebec at the Canada Games. Scouts have also noticed a pronounced progression in his play throughout this past season. His aggressiveness and work ethic are what make him an attractive player to all 18 teams in the QMJHL.