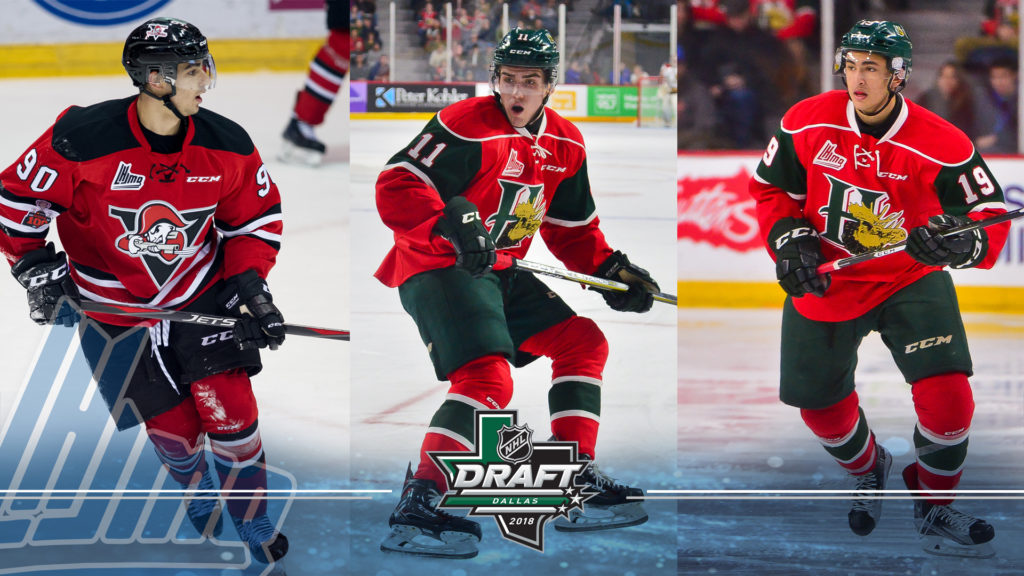 Three QMJHL forwards could fill the immediate needs for a number of clubs heading into the 2018 NHL Entry Draft.

The Czech winger put up a monster rookie campaign for the Halifax Mooseheads with 44 goals and 82 points in 57 games. He then carried that momentum into the playoffs with 12 points in nine games.

At the 2018 World Junior Hockey Championship over the holidays, Zadina proved he could compete with the world’s best, posting seven goals in seven games for the Czech Republic. The 6-foot-1, 192-pounder stood out for all the right reasons the bigger the game situations got and proved that he knew how to use his big frame to create space.

Experts see him as a player who capitalizes on his chances and who can create his own scoring opportunities. He loves to shoot the puck, averaging four shots per game last season. He also led all first-time NHL-draft eligible players in the QMJHL with a 0.82 points per game average at even strength – his closest rivals being Benoit-Olivier Groulx (0.44) and Joe Veleno (0.42).

Zadina protects the puck well and even showed he can play shorthanded as his four short-handed points can attest to. He is dangerous whenever he has the puck on his stick, rarely gives it away, and his overall speed has him leading the offensive charge more often than not.

The 18-year-old phenom’s name has been on the scouts shortlists for a few years now. After all, Veleno does remain the only player in QMJHL history to have earned the exceptional player status, having done so at age 15 when he earned the right to join the league.

Over the past 12 months, the young centreman has bulked up with some extra muscle as he now stands 6-foot-1 and tips the scale at 190 pounds. As a 15-year-old, he put up 43 points in 62 games and then followed his rookie campaign with 40 points in 45 games as a sophomore. After amassing 31 points in as many games for the Sea Dogs to start this past season, he exploded after being dealt to Drummondville with 48 points over his final 33 games with the Voltigeurs.

On the international stage, he particularly turned heads at a pair of Ivan Hlinka Memorial Tournaments with 11 points in nine games for Canada, including serving as captain when he led his nation to the championship back in 2017.

The Montreal native has great instincts out on the ice and manages to excel even with limited time and space. His strong skating gives him an even bigger edge over the opposition. Veleno might not be the purest goal-scorer, but he uses his judgement to create scoring chances for himself and for his teammates. Veleno can direct a puck to the net or hold the puck long enough for things to open up. He is basically a threat to score whenever he has the puck on his stick.

The top pick at the 2016 QMJHL Draft, Groulx discovered the game at a very early age. He is the son of the head coach of the AHL’s Syracuse Crunch, Benoit Groulx, who boasts 12 seasons of QMJHL head coaching experience under his belt and serves as the perfect mentor for his son who now finds himself on a path to the NHL.

With 31 points in 62 games as a rookie, Groulx had a solid season in his first taste of the QMJHL. But as a sophomore in 2017-18, the 18-year-old emerged as a key cog in the Mooseheads offence with 55 points in 68 games. He also racked up 100 penalty minutes thanks in part to his grit and hard work on each shift. He continued his ascension in the playoffs with eight points in nine games.

Born in Rouen, France, he never shies away from physical play and uses his 6-foot-1, 190-pound frame to his full advantage when he’s battling along the boards. The centreman also uses his strength well to clear his zone at any cost.

He has a good wrist shot and likes playmaking for his teammates. Groulx is a complete player and one who is always dedicated to his defensive play. He excels on special units as he is just as comfortable skating on the power play as he is playing shorthanded.