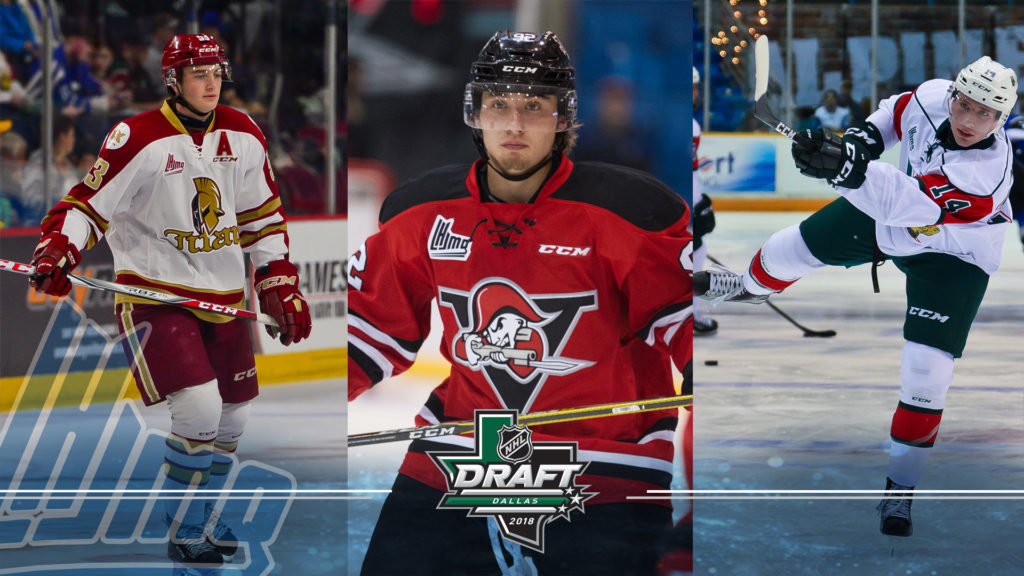 Several QMJHL prospects are hoping to hear their name called at the 2018 NHL Entry Draft on June 22 and 23 in Dallas. Among those are three QMJHL defencemen who are drawing attention and may hear their name announced earlier than most.

Noah Dobson of the Acadie-Bathurst Titan is the top-ranked defenceman coming out of the Q this year. His stock certainly rose this spring as he was dominant throughout the playoffs before piling up seven points in four games at the Memorial Cup. The Titan having won the President Cup and then the Memorial Cup was in large part thanks to Dobson’s handiwork.

The 6-foot-3, 180-pound rearguard will only continue bulking up over the next few years and all signs point to both his physical and offensive dominance also growing. The Summerside, P.E.I., native has seen his value skyrocket since the playoffs. During his impressive run with the Titan, he put up 13 points in 20 playoff games to go with a +9 differential, despite being matched up against the opposition’s top line on a nightly basis.

During the regular season, he was spectacular as well with 69 points in 67 games to finish tied for the second rank among the QMJHL’s top scoring blueliners, just behind teammate Olivier Galipeau. Dobson is renowned for his heavy and deadly accurate shot. He is a leader on the blue line and his team’s offence passes through him for the most part.

Dobson’s speed and mobility will also serve him well in the pro ranks. He impressed many at the Ivan Hlinka Memorial Tournament last August where he not only led Canada to gold, but his leadership qualities and amazing vision were also on full display.

Another product from the Maritimes, Jared McIsaac was a common conversation topic among scouts throughout the 2017-18 season. At 6-foot-1, 195 pounds, McIsaac never shies away from venturing into the corners to win his battles like any true uncontested leader would.

This native of Truro, N.S., who turned 18 in May is impressive enough based on his size and weight alone. The second overall pick at the 2016 QMJHL Draft, McIsaac immediately showed he could handle himself offensively to the tune of 32 points in 59 games as a rookie with the Halifax Mooseheads. He reached another level this past season with 47 points in 65 games and four points in nine playoff outings.

McIssaac also boasts experience on the international stage, which can’t be overlooked. He was an assistant captain at the Under-17 World Hockey Challenge in 2016, played at the IIHF Men’s Under-18 World Championship on two occasions and won gold at the Ivan Hlinka Memorial Tournament last summer.

He sees the ice extremely well and his skating puts him ahead of his peers, allowing him to be first on the puck and ready to begin the rush. He is tough to move in the corners with his imposing frame and he is constantly in movement. He is great at breaking up passes and at neutralizing opposing offences.

The other name being bandied about belongs to Nicolas Beaudin. The Durmmondville Voltigeurs’ blue line general may not be the biggest guy on the ice at 5-foot-10 and 172 pounds, but he makes up for it with his speed, puck-handling skills and his ability to excel in the opposition’s end. You can count Beaudin among the players who can surely benefit from the “new” NHL and the crackdown on clutching and grabbing.

Beaudin refuses to be cast aside due to his small stature and he made that clear for all scouts to see with his offensive wizardry this past season. He may not possess the size of a prototypical defenceman that will have NHL teams drooling, but the Chateauguay, QC., native more than makes up for it with the intelligent way he can read a play.

Experts see him as one of the passers in this year’s draft crop. In the offensive zone, he is able to orchestrate brilliant plays and sets up his teammates well. While his shot may not be the heaviest, Beaudin remains a constant threat on the power play thanks to his quick and accurate wrist shot that is known to fool a goalie or two.

His blazing speed makes him all the more dangerous as he carries the puck out of his zone or starts the rush. Beaudin is rarely caught out of position and his quickness allows him to take more risks offensively. By amassing 69 points during the regular season and 11 more in the playoffs for the Voltigeurs, he has proven he can put points up on the board. A tremendous athlete above all else, there were nights where he logged over 30 minutes of ice time, but Beaudin always managed to answer the call.