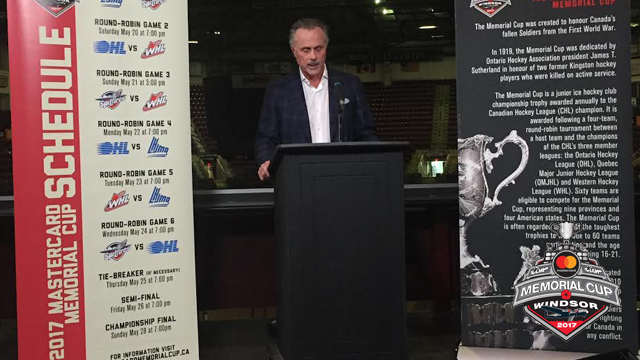 Windsor, ON – Details of events and displays to be staged in the three community rinks of the WFCU Centre were announced today at a news conference hosted by the 2017 Mastercard Memorial Cup Host Organizing Committee.

Riverside Minor Hockey will be showcased and the Hockey Hall of Fame will also have a miniature museum with a collection of recognizable trophies on display.

The “Mopar Fan Zone” will be located in the Greenshield Rink and will include interactive and static displays from Rogers, Chrysler, Scouts Canada and Parks Canada where fans can test their hockey skills with shooting accuracy, hardest shot, goalie challenges and more.

These exhibits will operate from May 19th to May 28th. There is no admission charge and you don’t need a 2017 Mastercard Memorial Cup game ticket to enter (entry to the Molson Hockey House is restricted to ages 19 and over).

Hours of operation can be found at MastercardMemorialCup.ca.

Windsor Spitfires’ alumnus Bill Bowler announced details of the CHL alumni game to be played Saturday May 27th at 2pm in the main bowl of the WFCU Centre. An impressive roster of players with ties to the Spitfires and Windsor-Essex will take to the ice for two twenty-minute periods. Reserved tickets are $15.00+HST and will be available at www.wfcu-centre.com starting April 20th. Partial proceeds will benefit a legacy project in association with Smilezone, the charity founded by Adam Graves and Scott Bachly dedicated to putting smiles on the faces of children facing health challenges.

Windsor Mayor Drew Dilkens was on-hand to provide more details of the Memorial Cup Arrival Community Celebration on May 18th.

The Memorial Cup will leave from Sarnia on the Canadian Coast Guard Ship Private Robertson V.C. and will dock in Dieppe Park at 6:00pm before being off-loaded at 6:30pm to embark on a military led parade to the Cenotaph on University Avenue. The Memorial Cup Arrival Ceremonies, a free family-oriented event, will start at 7:00pm. Following that, the trophy will be on display inside Windsor City Hall for public viewing and photographs until 9:00pm.

The Arrival Ceremonies will be preceded by the 2017 Mastercard Memorial Cup “Opening Banquet” at the St. Clair Centre For the Arts, featuring guest speaker Jim Ralph.

Finally, a time change for Game #2 of the 2017 Mastercard Memorial Cup was announced today. The May 20th contest between the OHL Champion and the WHL Champion will now start at 3:00pm.