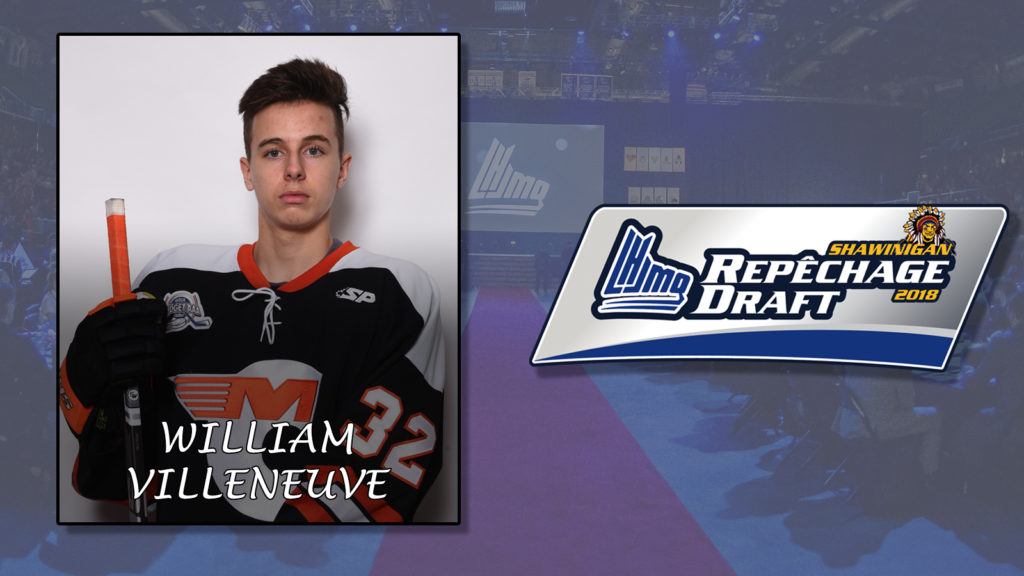 From Nathan Beaulieu, Thomas Chabot, Luke Green, Simon Despres, Pierre Durepos, and Éric Gélinas to Alex Grant, Charles-Olivier Roussel, Yann Sauve and Jakub Zboril, the Sea Dogs have had their fair share of elite defencemen patrol their blue line since the club’s arrival in the QMJHL in 2005. William Villeneuve could very well be next to do so…

The Magog Cantonniers’ rearguard is considered the No. 2 prospect heading into the 2018 QMJHL Draft and the Saint John holds the second overall selection. An excellent passer with a heavy shot from the point, Villeneuve also shoots right which is quite rare among defencemen.

“It’s an advantage for me, but I can’t take any credit for it! I was just born that way, but let’s just say that my parents did a good job,” laughed Villeneuve.

Villeneuve could also interest the Sagueneens at No. 1. To be honest, no team can really be able to overlook a player like him.

“He has good offensive skills. He makes good decisions with the puck and knows how to find space. He’s got good size and uses his stick very well. In my eyes, he’s a sure thing,” admits Director of QMJHL Central Scouting, Carl Bouchard.

The 6-foot-1, 154-pound rearguard evaluates his reading of the play as his biggest asset.

“I see the game develop. I’m not the type to deliver the hardest check, but I’m not afraid to use my body to separate a player from the puck. I’m tall and I use that to my advantage. I skate well, I’m very competitive, and I would like to improve my strength and the way I manage my energy,” admits Villeneuve.

Nothing but good words from Felix Potvin

“We knew that William had a lot of potential. We had big expectations for him this past season, but we never imagined he would do all he did this past year. His meteoric rise and the role he took on for our team was huge,” explains his head coach and former NHL star goalie Felix Potvin.

Potvin compares Villeneuve to Kristopher Letang of the Pittsburgh Penguins, a defenceman “who doesn’t hurt you much defensively but who brings a lot of offence.”

His attitude also makes him a strong pick.

“He wants to be the best player he can be and is ready to work to get there. As much off the ice as on it, his attitude is without reproach. He is always the first guy to want to help a teammate or the equipment manager. He truly is the type of player you want in your dressing room.”

A ring on his finger

A Jimmy-Ferrari Cup champion with the Magog Cantonniers and Telus Cup finalist, William will never forget the season he just lived.

“We had a fantastic team both on the ice and in the dressing room,” said Villeneuve who amassed 34 points in 40 games before adding 15 points in 18 playoff games.

Midget AAA defenceman of the year and first-team League All-Star, he believes he is now ready to make the leap to the QMJHL.

“I have no team of preference. I will wear whatever jersey I wear with pride once a team shows the confidence in me to select me at the draft. If things fall the way, it is expected and it’s the Sea Dogs, that is perfect. They are a first-class organization. They are a team in rebuilding mode and they are putting their faith in young players. I can really see myself in their team colours.”