NHL Draft
by
Will MacLaren 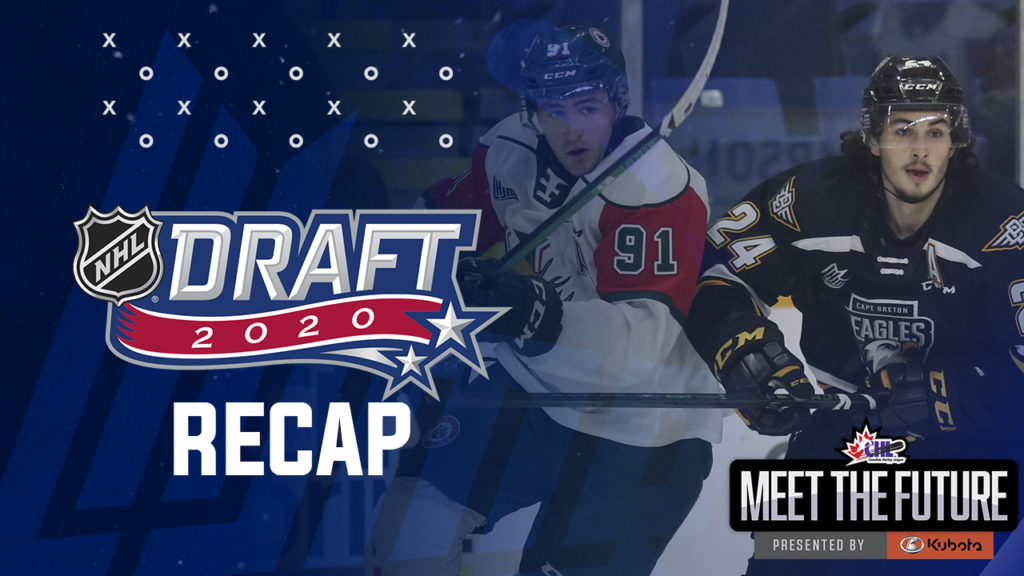 After an exciting first round of the 2020 NHL Entry Draft that saw five players from the QMJHL chosen Tuesday night, the league witnessed an additional 15 athletes, that either have or are expected to call the league home, take their first steps towards potential pro careers.

The action began at pick number 53 when the Carolina Hurricanes grabbed Shawinigan Cataractes center Vasily Ponomarev. Making his way from Zelenograd, Russia as the ninth selection of the 2019 CHL Import Draft, Ponomarev racked up 49 points in 57 games, raising both the fortunes of the improving Cataractes and his own draft stock in the process. 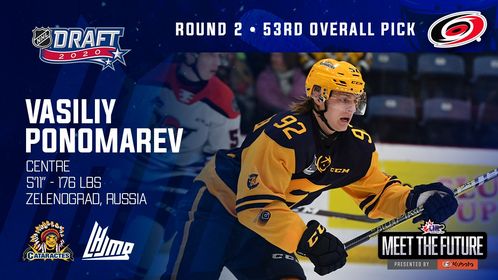 The next player from the “Q” to earn selection also happened to be the league’s top goal scorer in 2019-20. Cape Breton Eagles winger Egor Sokolov was chosen 61st overall by the Ottawa Senators following a 46-goal, 92-point campaign. Selected in his third year of eligibility, the 19-year-old from Yekatarinburg, Russia ends his career in the league with 191 points in 184 regular season games. 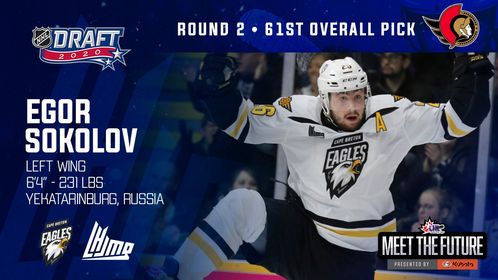 The third round began a run on QMJHL defensemen when, with the 68th selection, the Vegas Golden Knights snagged Lukas Cormier. The Charlottetown Islanders stalwart, who was chosen fourth overall at the 2018 QMJHL Draft, turned heads with a nearly point-per-game campaign (36 points in 44 games) in 2019-20 despite missing time to injury. He also used his keen hockey sense to continually make strides with his game away from the puck. 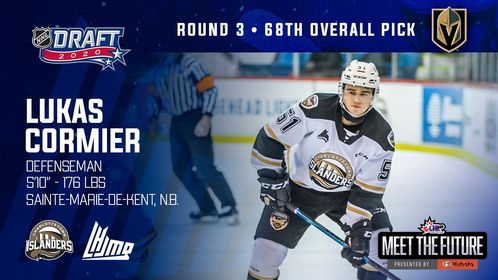 Another blueliner from a Maritimes-based franchise saw himself taken with the 72nd pick, when the Calgary Flames called the name of the Saint John Sea Dogs’ Jeremie Poirier. Known for his offensive mentality, the Salaberry-de-Valleyfield, Quebec native finished tied for second among QMJHL rearguards with 53 points, including a league-best 20 goals, in 64 games. Highly touted entering the Draft, Poirier, the eighth overall selection at the 2018 QMJHL Draft, will be expected to help lead the charge of a strong Dogs squad this year. 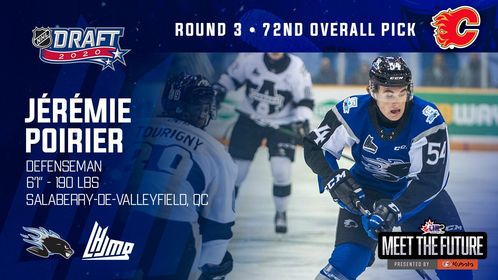 The defensemen kept on coming off the board into the fourth round when the Anaheim Ducks used the 104th pick to snag Thimo Nickl of the Drummondville Voltigeurs. The Klagenfurt, Austria product made a solid impression during his rookie campaign in the “Q”, posting 39 points in 58 games, good for third among all freshmen blueliners. Nickl, who currently remains in Europe, was selected in the first round, 50th overall, of the 2019 CHL Import Draft. 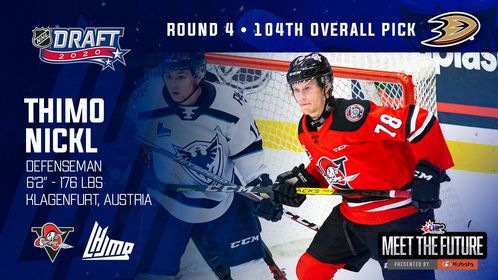 The run of defensemen came to a brief end with the selection of Acadie-Bathurst goaltender Jan Bednar by the Detroit Red Wings with the 107th choice. Though he has yet to play in the league, the 18-year-old from Karolvy Vary, Czech Republic is slated to join the Titan this season. With Bednar spending time in two Czech leagues as well as with the Nation’s Under-18 program last season, he was not considered as a player drafted out of the QMJHL. Therefore, he isn’t included in the aforementioned 19-player total hailing from the “Q”.

Jan Bednar has been selected in the fourth round, 107th overall by the @DetroitRedWings!

The Toronto Maple Leafs became the next club to choose a QMJHL blueliner when they took William Villeneuve at pick number 122. The second overall selection at the 2018 QMJHL Draft, Villeneuve led all league defensemen – and the Saint John Sea Dogs – in scoring last year with 58 points in 64 games, the only “Q” rearguard to top his club in points in 2019-20. He becomes the first defenseman to be chosen by the Leafs since Hull’s Dominic D’Amour back in 2002. 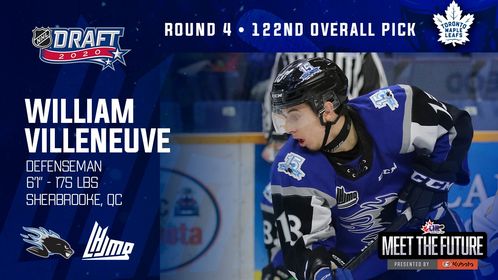 Round five was a hit for the league with four players chosen, starting with Halifax Mooseheads winger Elliot Desnoyers, taken 135th overall by the Philadelphia Flyers. In his first two seasons in the league, spent with the Moncton Wildcats, the 18-year-old from St-Hyacinthe, Quebec picked up 66 points in 124 games, including 35 points while serving in mostly a bottom six role with a very strong Moncton club last year. A presence on and off the ice, Desnoyers has already been named an Assistant Captain in his first year with the Mooseheads. 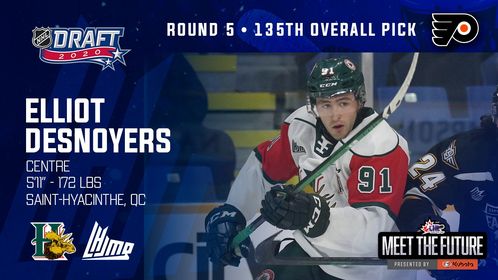 The Calgary Flames then announced the selection of Cape Breton Eagles winger Ryan Francis with choice number 143. A third-year veteran of the “Q”, Francis rode a breakout 2019-20 campaign into Wednesday’s selection when he picked up 24 goals and 72 points in 64 games with an offensively potent Eagles squad. It was a performance that earned him a spot in the 2020 Kubota CHL/NHL Top Prospects Game last January. 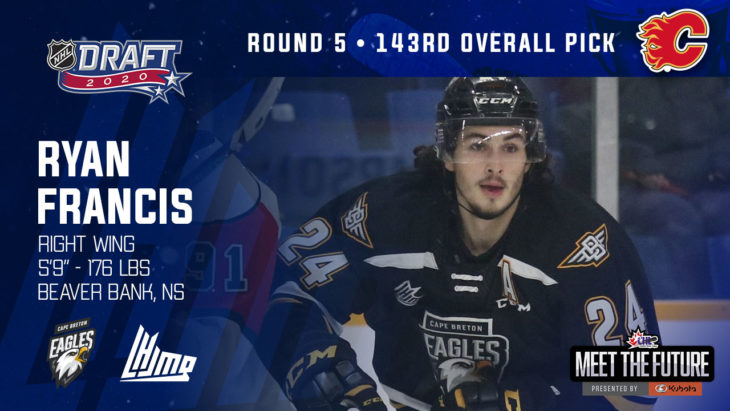 With the 149th pick, the Pittsburgh Penguins took winger Raivis Kristians Ansons. A second-round selection at the 2019 CHL Import Draft, the 18-year-old from Riga, Latvia remained a steady presence in a Drakkar lineup that experienced significant transition last year. Still in Europe at the present time, Ansons made an impression early on in North America before wrapping up his rookie campaign in the QMJHL with 35 points in 60 games. 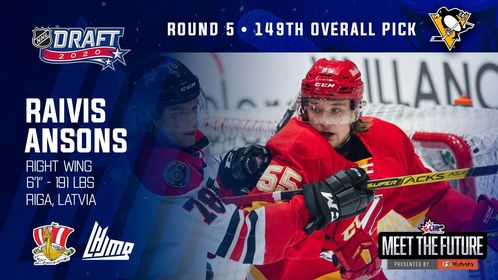 The New York Islanders used the 152nd choice to select Drummondville Voltigeurs winger William Dufour. The sixth overall selection, originally by the Rouyn-Noranda Huskies, at the 2018 QMJHL Draft, Dufour made his way to the Volts from Chicoutimi during the holiday trade period. He responded to the change in address with 33 points in 28 games with a Drummondville club that finished the abbreviated campaign as strongly as it began. 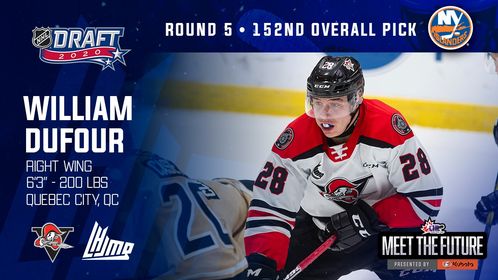 The first of two players taken in the sixth round, the Ottawa Senators didn’t let limited viewing time skew their opinion when they chose Moncton Wildcats center Philippe Daoust at number 158. A 2019 free agent invite from Barrie, Ontario, Daoust proved highly effective as a role player with the Cats last year, earning 29 points in 58 games while also proving to be an aggressive penalty killer as evidenced by his three shorthanded tallies. 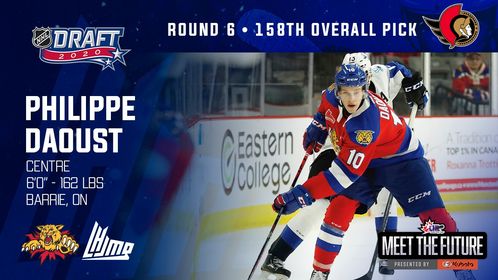 The lone netminder to actually see playing time in the QMJHL came off the board with the 185th pick as the Dallas Stars nabbed Remi Poirier of the Gatineau Olympiques. Inheriting the starter’s role in Gatineau just before Christmas, the 18-year-old from Granby, Quebec posted an impressive 19 wins and four shutouts with an Olympiques squad that relied heavily on his performance between the pipes behind a defense corps with a steep learning curve. 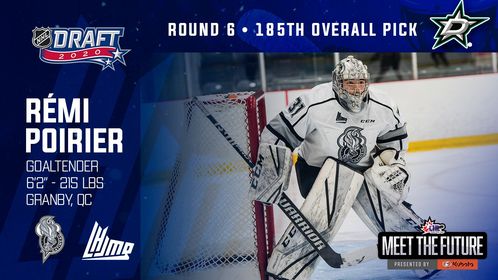 The seventh and final round saw two more QMJHL players selected, including Chicoutimi Sagueneens defenseman Louis Crevier, who was taken 188th overall by the Chicago Blackhawks. A big body (6’8”) on the Sags back end, the 19-year-old from Quebec City, Quebec saw action in several key situations with a stacked Chicoutimi squad in 2019-20. He responded in positive fashion with 21 points in 59 games as well as a +18 rating. 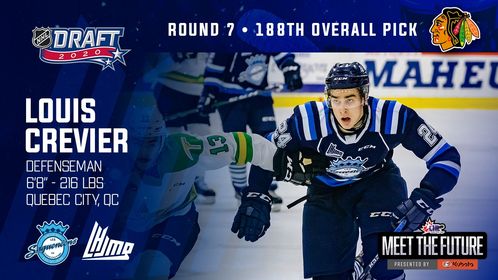 The “Q” contingent at this year’s Draft concluded when the San Jose Sharks chose Rimouski Oceanic winger Adam Raska at number 201. Injuries and an appearance with the Czech Republic at the 2020 IIHF World Junior Hockey Championship limited Raska to just 35 games in his lone QMJHL campaign. However, he made that time count, producing 13 goals and 21 points. Raska has remained in the Czech Republic this campaign, suiting up for HC Ocelari Trinic. 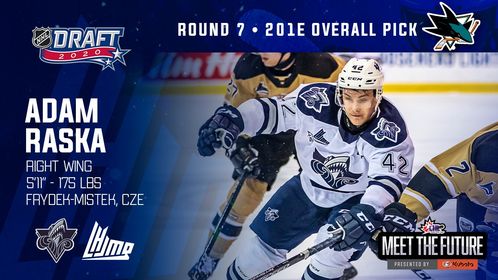