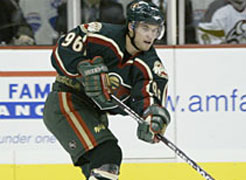 BOUCHERVILLE, Saturday, April 12, 2008  In the next few weeks, the official website of the QMJHL will present a series of interviews with a few of its former players. This week, we sit down with Pierre-Marc Bouchard.

Pierre-Marc, a 23-year-old forward, is one of many former QMJHLers who has broken through and made it to the National Hockey League. He played his major junior hockey with the Chicoutimi Sagueéens, his skates touching the ice of the Georges-Vézina Centre for the first time at the beginning of the 2000-01 season.

At the conclusion of his second campaign, he collected four trophies at the Golden Puck Awards Gala: Jean -Béliveau (Top Scorer), Michael-Bossy (Best Professional Prospect), Michel-Brière (Most Valuable Player) and Ford (Offensive Player of the Year).

He was selected in the first round, 8th overall, by the Minnesota Wild in the 2002 NHL Entry Draft. He started the 2002-03 season in Minnesota and never looked back.

<i>What do you think were your biggest strengths over the course of your major junior career?</i>

"I would have to say that my vision was my best asset. I also had good speed and good hands, which probably played a huge part in my performances."

<i>What do you miss the most of your major junior experience?</i>

"Actually, I miss scoring every game (laughs). In all seriousness, I miss the relationship I had with my teammates. When you play junior hockey, you cultivate a special relationship with the guys. It’s a group experience and we grew very close. I remember playing <i>Playstation</i> with the guys in some basement or another. In the NHL, each player has more responsibilities, like a family. Everybody does their own thing."

<i>Reflecting back on your relatively young professional hockey career, do you think that you would have profited from an extra year of seasoning in major junior hockey before making the jump to the NHL?</i>

"It’s a question I don’t think I’ll ever have an answer to. I think that it was a good decision. The organization knew how to bring me along and how to best integrate me to the team. Although I progressed slowly, I think it was the best thing to do."

<i>Your brother, François Bouchard of the Baie-Comeau Drakkar, was also drafted by an NHL frachise (Washington, 2006, 2nd round, 35th overall). Are there any similarities in the way you play the game? </i>

"There are resemblances. We both have good vision and see the play develop. I think the major differences are in weight and size. François spends more time in front of the net than I do. I usually just pounce on the puck in front of the net."

<i>Éric Bélanger, Stephan Veilleux and you are the only three Quebecers in Minnesota. How would you describe the atmosphere in the dressing room?</i>

"Even though the coaching staff is made up of a majority of francophones, we aren’t any closer to them than any other players. Obviously, we stick together since we have a lot of things in common. We talk about home and it helps that our first language is French."

<i>What advice would you give up and coming players who wish to make it to the NHL? </i>

"Well, I think everybody has a chance. Statistics aren’t the be all and end all. Also, if you happen to not make it to the NHL, there are several pro leagues where guys can play and make a good living. There are several options. I don’t think that major junior hockey is selling dreams, guys are playing because they love the game."