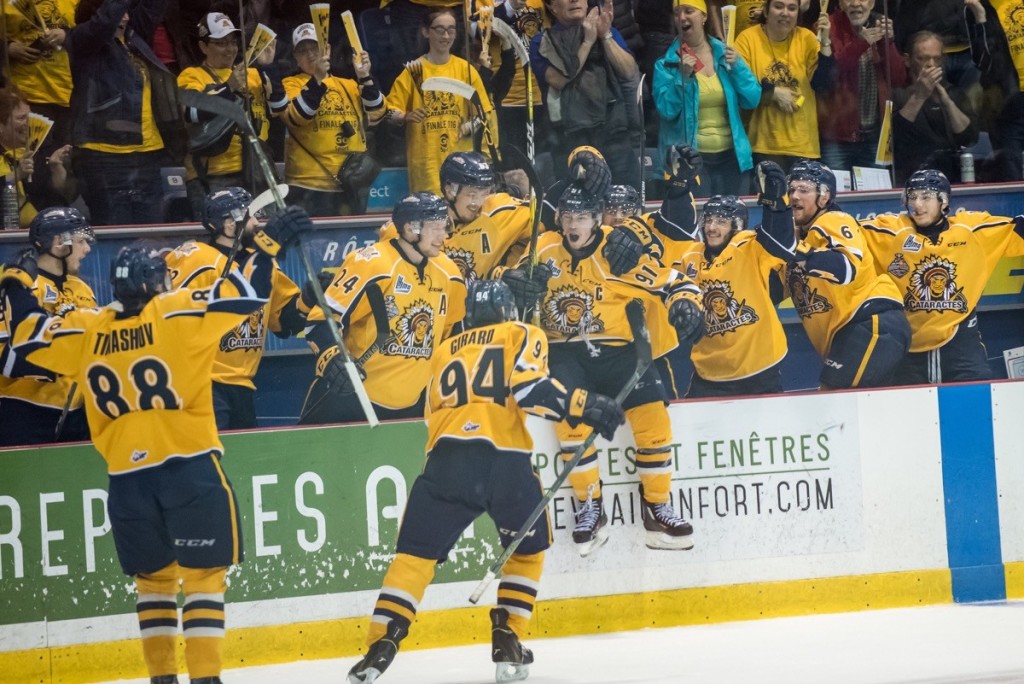 With a sold-out crowd on their side at the Centre Gervais Auto, the Cataractes delivered their strongest performance of the series to stay alive and force a Game 5 on Thursday night in Rouyn-Noranda. After opening the scoring in both Games 1 and 3 only to end up on the losing end, Shawinigan opened the scoring once again but this time made it stick.

Much to the delight of the Cataractes’ faithful, Alexis D’Aoust did the honours with this ninth goal of the playoffs at the four-minute mark of the first period.

After heading into the intermission with that one-goal advantage, the Cataractes doubled their lead at the just under the five-minute mark of the second period when Alex Pawlczyk scored his seventh playoff goal.

With the crowd in a frenzy, the Cataractes continued to pour it on, making it 3-0 at 8:54 of the second frame as Tampa Bay Lightning prospect Dennis Yan got his revenge scoring his ninth of the postseason to chase goalie Chase Marchand from the game. The Rouyn goalie had been virtually unbeatable this spring especially in this series, with the 20-year-old netminder having come into Game 4 with only four goals allowed in three games.

The gutsy move by QMJHL Coach of the Year Gilles Bouchard paid almost immediate dividends as the Huskies’ Martins Dzierkals got Rouyn on the board with his fifth of the playoffs. The rest of the second frame was all Huskies as they buzzed around the Cataractes zone trying to again solve Philippe Cadorette.

Then with under two minutes to go in the period, the ever-dangerous captain and Ottawa Senators prospect Francis Perron hammered a one-timer past Cadorette to make it 3-2 heading into the third period with his 12th goal of this postseason.

Just when it looked like the ice would be tilted in favour of the Huskies to close out the game, a solo effort Gabriel Gagne restored a two-goal cushion for the Cataractes only 90 seconds in the final period.

True to form, the Huskies kept on battling, tying the game on goals by Philippe Myers and Gabriel Fontaine, 38 seconds apart halfway in the third frame. It was Myers’s third goal and Fontaine’s fifth ringer of the playoffs.

The see-saw battled continued until Cataractes captain Anthony Beauvillier almost blew the roof off the arena by notching his 15th goal of the playoffs to give Shawinigan a 5-4 lead with just under six minutes to go in regulation. This game-winning effort had the New York Islanders prospect picked as the game’s first star.

The Cataractes held on and scored an empty net goal to seal the thrilling win.

When the dust finally settled, Toronto Maple Leafs prospect Dmytro Timashov led the way offensively for the Cataractes with a goal and two assists and the third star of the game, while Beauvillier, Gagne and Samuel Girard each had two points apiece.

In a losing cause, Perron led the way for his Huskies with a goal and an assist as he tied Sven Andrighetto as the franchise’s all-time leader for points in a playoff year with 30.

Between the pipes, Cadorette got the job done for Shawinigan kicking aside 33 of the 37 shots he faced on a night his team was out-shot by a whopping 16-shot margin. After allowing three goals on nine shots for the Huskies, Marchand was replaced by Samuel Harvey who stopped six of eight shots.

So on a crazy night in Shawinigan, the ginger ale remained on ice for the Huskies while the President’s Cup stayed in its case and will make the trek back to the Abitibi region.

With the battle lines now clearly drawn and the Cataractes having rediscovered their mojo, the teams will get back at it on Thursday night in at the Centre IAMGOLD in Rouyn. Puck drop is at 7:00 p.m. and the President’s Cup will again be in attendance as the Huskies try once more to claim it for the first time in team history. The game will be available live on TVA Sports.