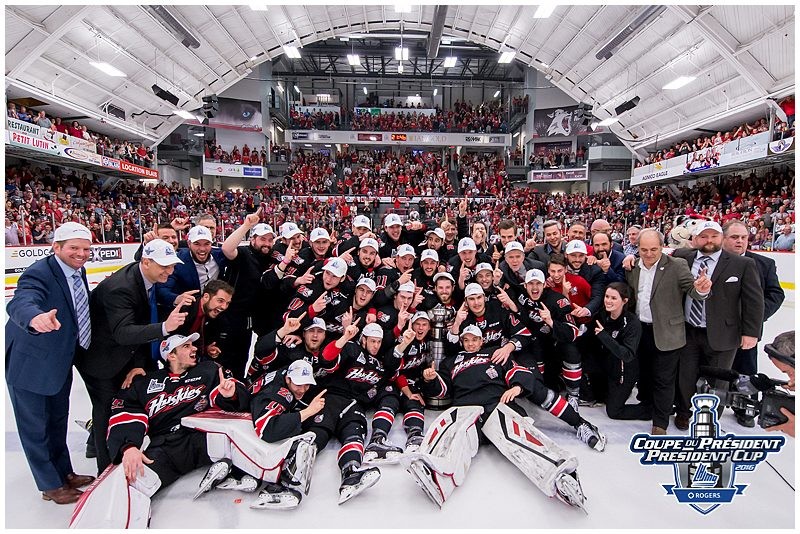 Rouyn-Noranda, QUEBEC – It’s been 20 years of passionate waiting and now for the first time ever, the Rouyn-Noranda Huskies are QMJHL champs.

Martins Dzierkals scored twice, Anthony-John Greer tallied a goal and two assists while captain Francis Perron collected three assists, Thursday, to lead the Huskies to a 7-2 win over the Shawinigan Cataractes in Game 5 of the President Cup Final at IAMGOLD Arena in Rouyn. The Huskies took the best-of-seven series 4-1

Timo Meier, Philippe Myers, Alexandre Fortin and Mathieu Boucher also scored for Rouyn-Noranda. Meier and Myers also each had an assist, while Gabriel Fontaine had two. Goaltender Chase Marchand made 15 saves on 17 shots.

Charles Taillon and Dennis Yan found the back of the net for Shawinigan, while Philippe Cadorette stopped 31 of the 38 shots he faced.

By coming up with three points during the game, Perron set a new franchise record for most points in a playoff year. He finished the 2016 QMJHL playoffs with 33, three more than the previous record of 30, first set by Sven Andrighetto.

Perron also picked up the Guy Lafleur Trophy awarded to the Playoffs MVP, to go with his regular-season MVP award he won a few weeks ago, becoming the first to win both trophies since Jonathan Drouin of the Halifax Mooseheads in 2013.

The Huskies took a 4-1 lead in the first period on the strength of Greer’s 12th goal of the playoffs and Myers’ fourth, both on the power play, as well as Meier’s 11th and Dzierkals’ sixth.

Greer opened the scoring at 1:44 on a breakaway, as he saw Cadorette stop his initial shot but was able to push the rebound home. Meier then put Rouyn-Noranda up 2-0 at 7:38 when he found himself all alone at the right post in front of an open net, after the Huskies had attracted Cadorette away from the goalmouth by controlling the puck around the zone.

Taillon replied for Shawinigan with his first of the playoffs at 12:15 by converting a Alexis D’Aoust pass following a turnover that occurred at the opposite end of the ice.

Rouyn-Noranda went back up by two at 15:56 when Dzierkals skated from behind the goal line and into the right faceoff circle, where he turned around and shot the puck over Cadorette’s shoulder on the short side. Myers made it 4-1 at 19:37 with a slapshot from the top of the left circle.

The Huskies, who had won all 10 of their previous playoff games where they had the lead after 20 minutes of play, scored two more goals in the second period to make it a 6-1 score.

Fortin scored his fourth goal of the playoffs at 11:08 when he converted a cross-ice pass from Meier as he was skating into the right faceoff circle. Boucher was then credited with his third postseason goal at 19:08 when the puck was shot from the end boards and deflected on Cadorette’s leg into the net.

Yan scored his 10th of the playoffs for Shawinigan at 0:48 of the third period on a shot from the slot, but Dzierkals replied with his seventh postseason goal on Rouyn-Noranda’s behalf at 2:17, when he was on the receiving end of a Zachary Lauzon cross-ice pass while standing to the left of Cadorette.

The Huskies will play their first Memorial Cup game on Saturday, May 21, against the Western Hockey League champions. The WHL Final is still being played between the Brandon Wheat Kings and the Seattle Thunderbirds, with Brandon leading the series 3-1 and Game 6 slated for Friday night.

Each game of the national tournament will be available live on Sportsnet and TVA Sports.